What Were These Drivers Thinking? The Worst Parking Fails Ever 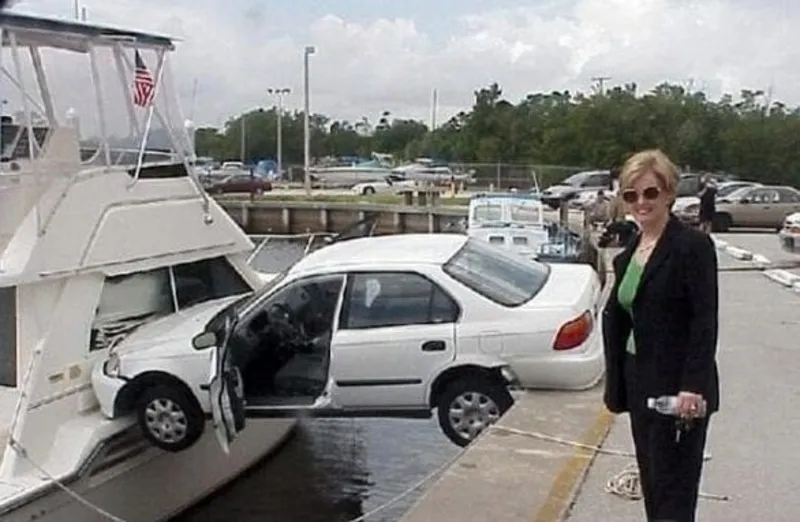 Cruising
This person apparently saw too many car chases on TV and imagined themselves launching onto that yacht and landing perfectly.

Unfortunately, this is real life and instead, they had to get out by dropping into the water and ended up paying the owner for the damage. 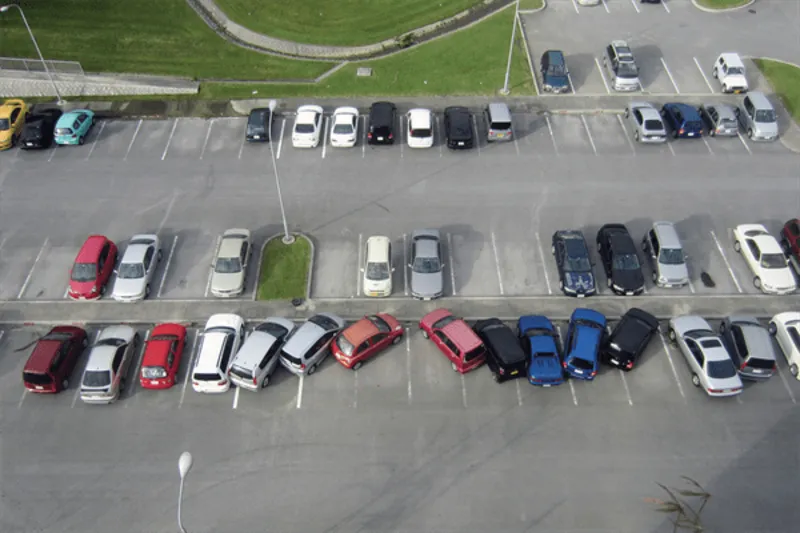 Tilt-A-Park
Although there seems to be plenty of parking at the edge of the lot, for some reason all these cars decided to take the lead from the pink and red cars who, for some unclear reason, started this whole parking fiasco. The cars are not only parked diagonally, but they‌ ‌are also actually touching each other in places.

It’s like the parking madness was contagious. Hopefully, everyone had their fun and no cars were damaged in this game of parking lot domino gone wrong.

A Stinky Parking Job
It is important to remember that the way you park affects others. You can’t expect to just leave your car wherever you like and not suffer from any repercussions. If you haven’t yet, that just means you’re lucky and that you should learn from the error of your ways before someone takes revenge. That’s clearly what happened to this stinky Parker.

This guy had had enough and found the perfect way to make the driver of the back car think about his actions. Kudos to him for doing so without damaging the car. 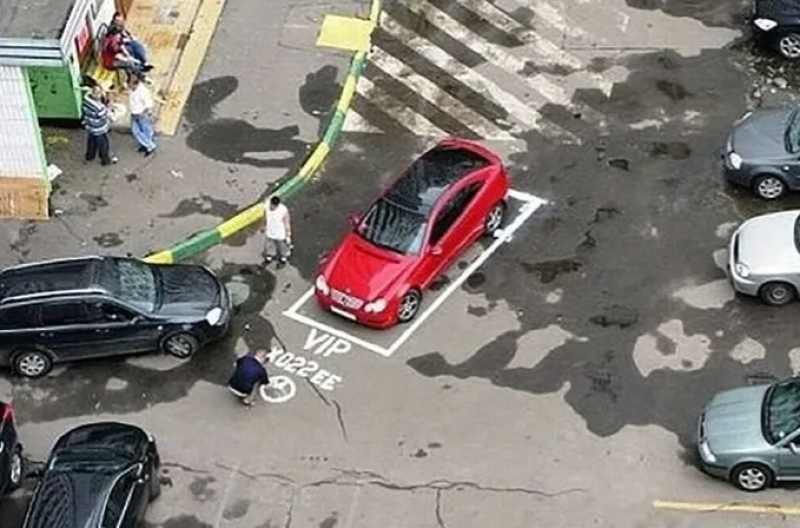 Very Inconsiderate Parker
Whoever owns this red car clearly cannot be bothered worrying about unimportant things like how people will get around the car they just left in the street. Therefore, it seems like good sense to add a special parking spot just for them. We are pretty sure that the VIP, in‌ ‌this‌ ‌case, does not stand for very important person, although they obviously believe they are just that, but for Very Inconsiderate Parker.

Luckily, after this impromptu paint job, the people in the neighborhood will not quickly forget their diva behavior. 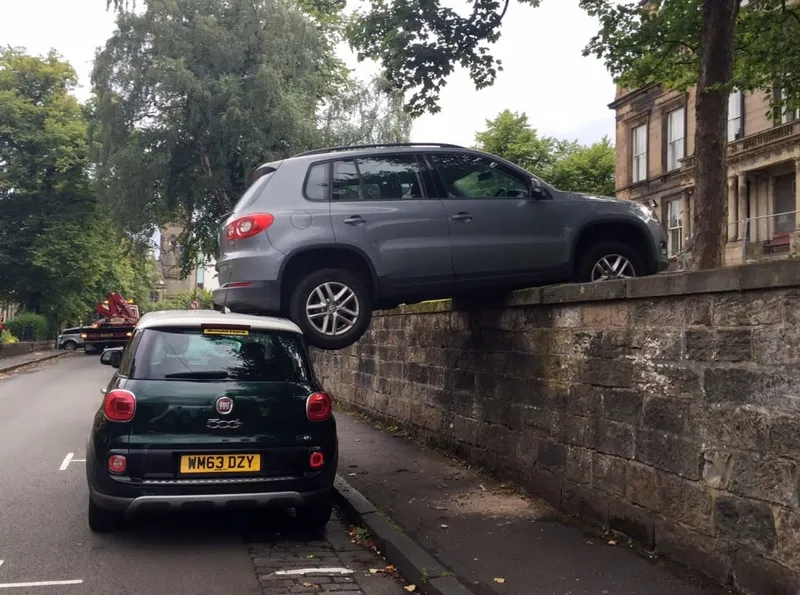 Double Decker Parking
It is not clear how this car ended up balanced on the Fiat in the first place. It is like bad parking is its own special gymnastic sport. Well, this grey car certainly deserves a medal for creative bad parking.

To end up like this, they must have been taking directions from someone who has really bad depth perception or had faulty parking sensors. Either way, they should call in the professionals at this point, before more damage is done to either car. 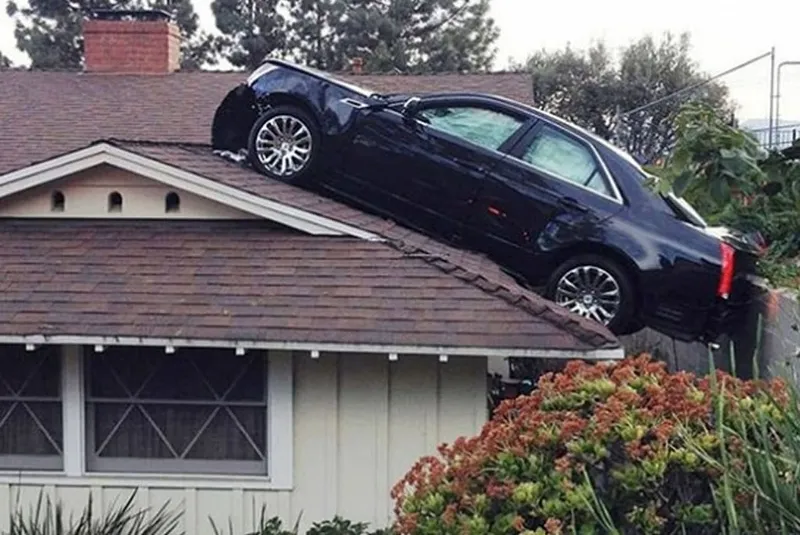 On House Parking
When the realtor was talking about parking right on the house, we’re pretty sure this is not what she meant. We’re not sure if it would be better if this was the car owner’s house or a stranger’s house. On the one hand, you wouldn’t want your car and house to be damaged at the same time, on the other, you certainly wouldn’t want to deal with the person whose house you just parked on.

Well, maybe they won’t notice, after all, how many people actually look up at the roof of their house? 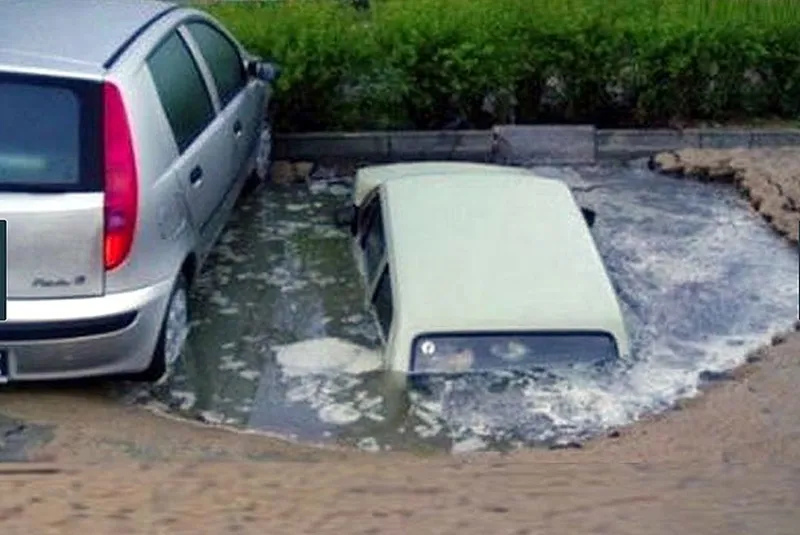 Submarine Parking
This person actually parked in a regular spot, and from what we can tell, they’ve even parked inside the lines. Which makes you wonder if there was any warning that this parking spot was going to turn into a swimming pool. In any case, all we can think about is the heartbreak of whoever owns this car when they next want to use it.

And one other burning question, will the clicker still work? Next time, it is important to listen to storm warnings on the Weather Channel and maybe consider parking inside, where it’s safe. 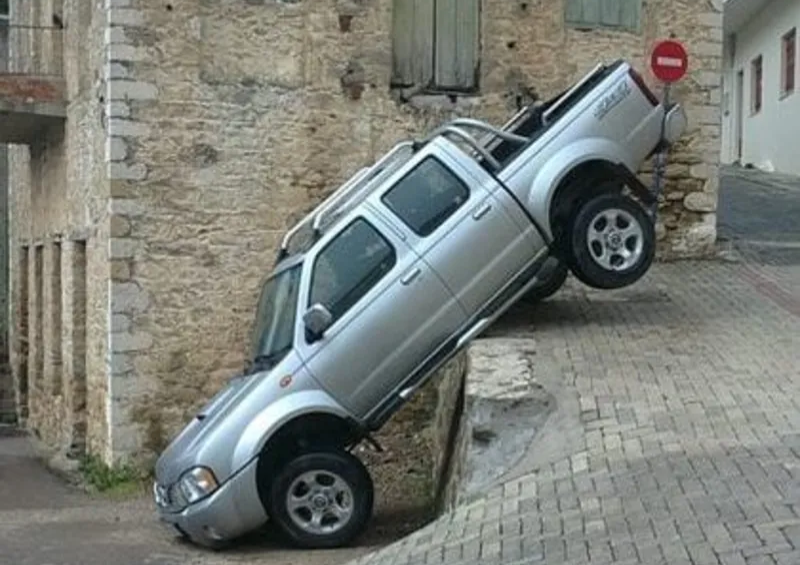 Defying Gravity
This car is plain old living in the future. While all of us are still stuck driving horizontally, they are already driving vertically. Unfortunately, the rest of the world has not caught up with the owner of this vehicle, as shown by the no entry sign and by the parking, which is not suited to this type of travel.

We hope this space car wasn’t too badly damaged and can continue onwards, in the hope of showing us the future of sky travel, with more lanes and less traffic. 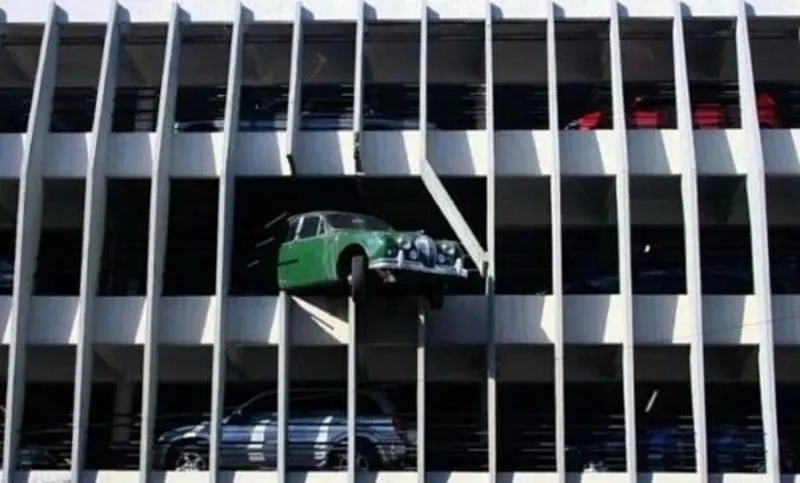 Peekaboo
Not everyone wants to leave their car in a dark and drafty parking garage all day, so this person had the bright idea of creating a window so their car could enjoy a bit of sunshine while they were away. Not only was the car happy to enjoy a bit of sun and a fresh breeze, but other cars got a bit more air too.

The parking garage owners got some renovation work done for free. All in all, this is definitely a win-win situation for everyone involved.

Nosedive
This poor car chose the perfect spot and parked carefully between the lines, not suspecting that the danger would actually be coming from above. As for the tow truck driver, you are supposed to be saving cars from tricky situations, not putting them in one.

How do you even begin to explain what happened here to the owner of the white car? The irony alone is enough to make you start laughing and never stop. 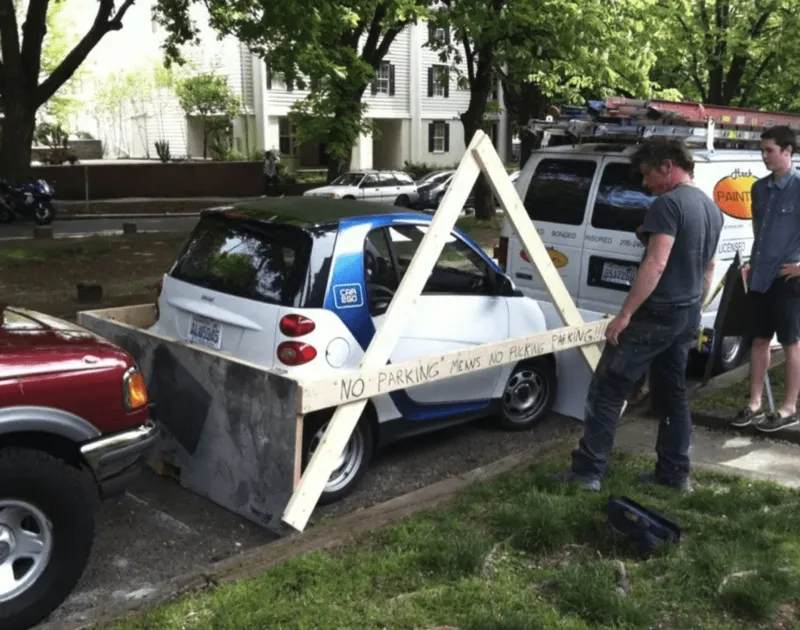 Boxed In
Part of the reason Smart cars have become so popular is their ability to park in tight spots. That does not mean they should park where it is clearly forbidden, which seems to be the case here, especially when free spaces can be seen right across the street! It takes an evil genius to construct this makeshift penalty box.

It is not going to be easy to get out of that, pretty much guaranteeing that this “Smart” driver will think twice about parking in the wrong spot again, which was pretty much the whole point. 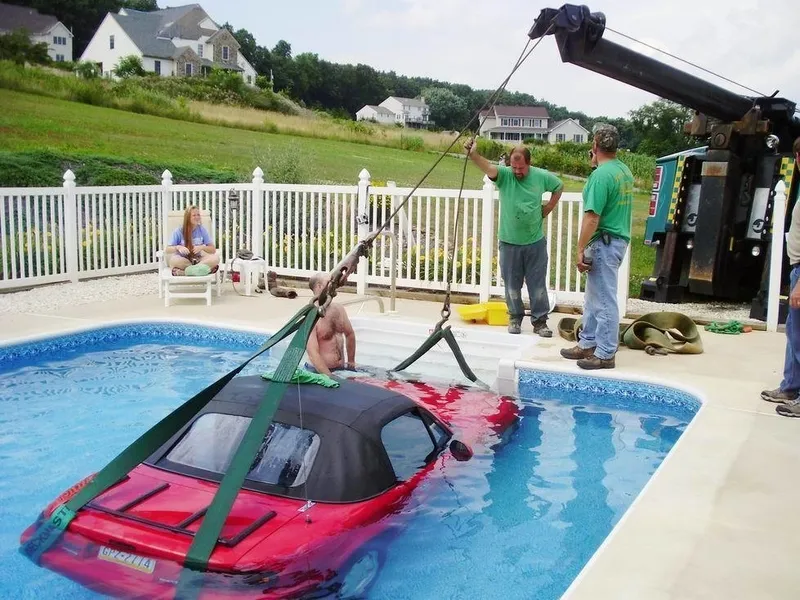 Carpooling
In this case, carpooling was obviously not the better option. It is hard to understand from this shot, how the car even got into the pool. It must have been dealing with a lot of pressure. It is not easy being such a cliché: a red, convertible sports car has to live up to all kinds of demands that we can’t even imagine.

It ultimately came to the decision that it had no other option than to take the plunge. We are certain that once it is pulled out and dries off, it will see the error of its ways. 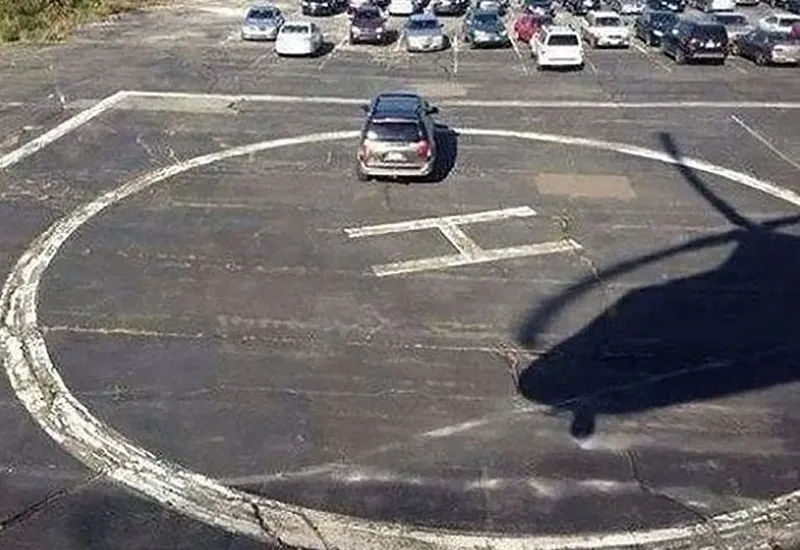 Helicopter Envy
Dreams are one of the things that make life worth living. It is so important to have something to aspire to. However, it is also important to realize when your dream has no way of coming true. This car has been dreaming all its life about soaring through the heavens.

Unfortunately, the technology is not advanced enough to be able to turn this sedan into a helicopter, and so, that is never going to happen. Someone should have told it that parking in the helicopter parking will not make its wish come true. 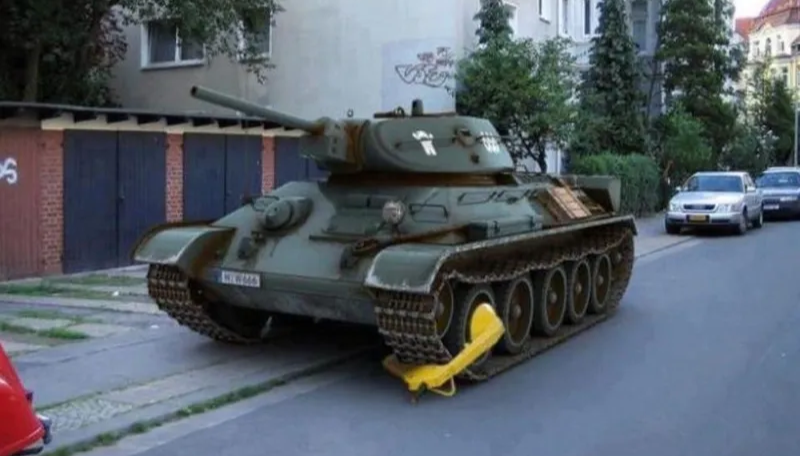 Booted Your Tank
Don’t you hate when you bring your tank home and when you want to head out to work in the morning it has a boot on the tire? Unbelievable, what do they even want from you? It’s their own fault that they don’t provide tank parking on the street.

All the other cars are also parked half on the sidewalk. Why are they singling you out? It’s not like you’re the only person who’s driving a tank, right? 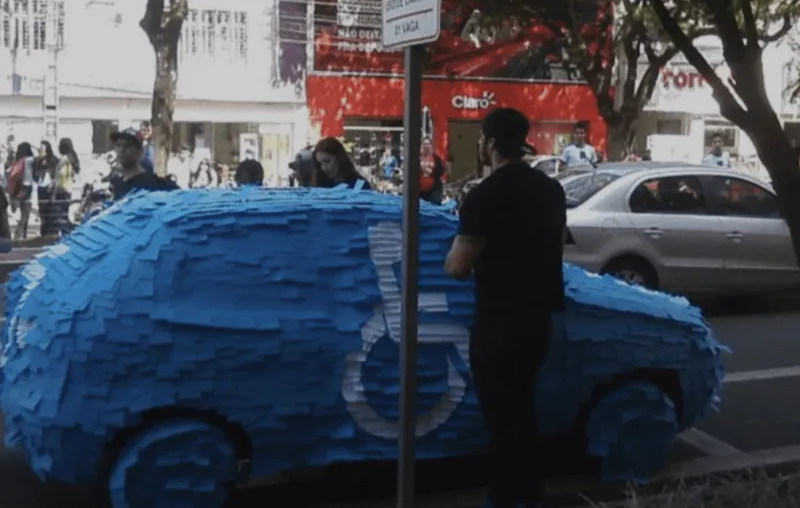 Post-It Palooza
Parking in a handicap spot is the height of selfish behavior, and you can’t expect to do something like that and not face some kind of retribution. Hats off to the person who devised this Post It punishment. They must have spent countless hours getting all these stuck on and making sure they were just right.

The result is not only amazing looking, but it gets the point across perfectly. We hope the driver used the time needed to remove these from their car to reconsider their actions. 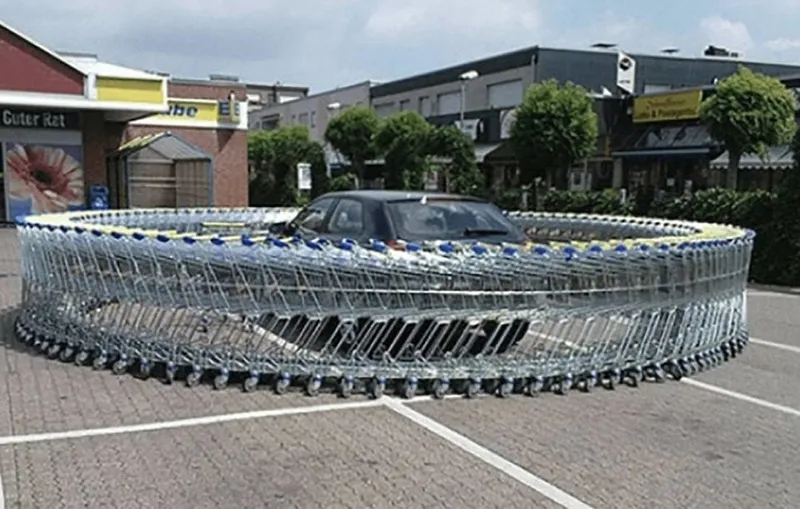 Circle of Carts
Grocery stores usually have plenty of parking, and not only that, but you don’t even have to carry your bags of groceries to your car, you can use a shopping cart to do the heavy lifting for you. That gives whoever decided to just ignore the parking spots and park right in front of the store no real excuse for their actions. Or at least that’s how the store employees saw it when they carted them in with this impressive circle of carts.

This must have taken some time, which means the parker did not just jump in for something. We hope they aren’t in a hurry, because dismantling this is going to take a while. 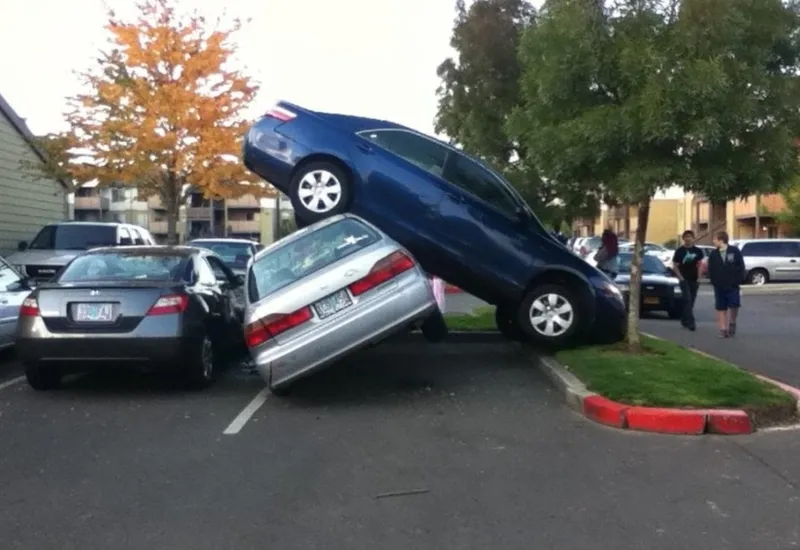 Stunt Gone Wrong
Is this a parking lot or a monster truck rally? We have absolutely no idea how these drivers managed to leave their cars in this position, or how they are going to get them out of it. Seems like someone thought they were Evel Knievel and could jump across all the cars in the lot.

When seeing the end result, it is clear that they should have heeded the advice often seen on TV: “don’t try this at home.” Hopefully, they learned their lesson and will leave stunt driving to the professionals from now on. 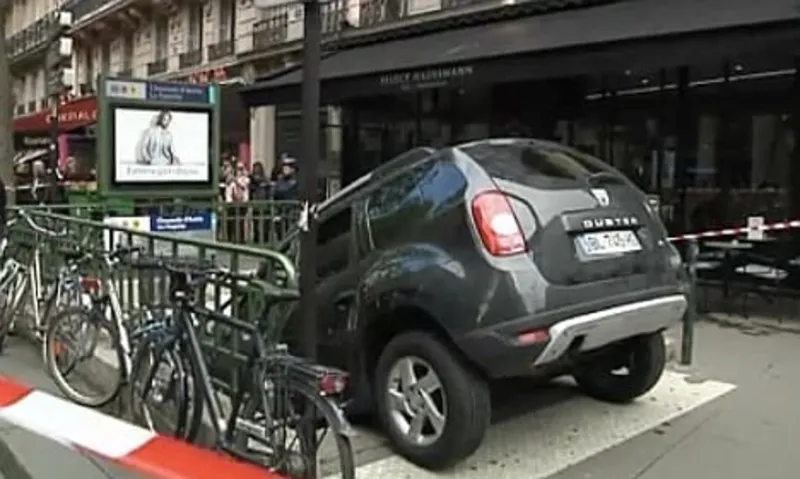 Subway Stop
Owning your own car is the best, and one of the best things about it is that you no longer have to use public transportation. No more standing unreasonably close to other commuters or walking in the rain to the bus stop. But there is also a downside, the high price of gas, insurance, and standing in traffic for hours at a time.

Seems like the owner of this car couldn’t take it anymore and decided that they were sick of driving, they were going to take the subway instead! 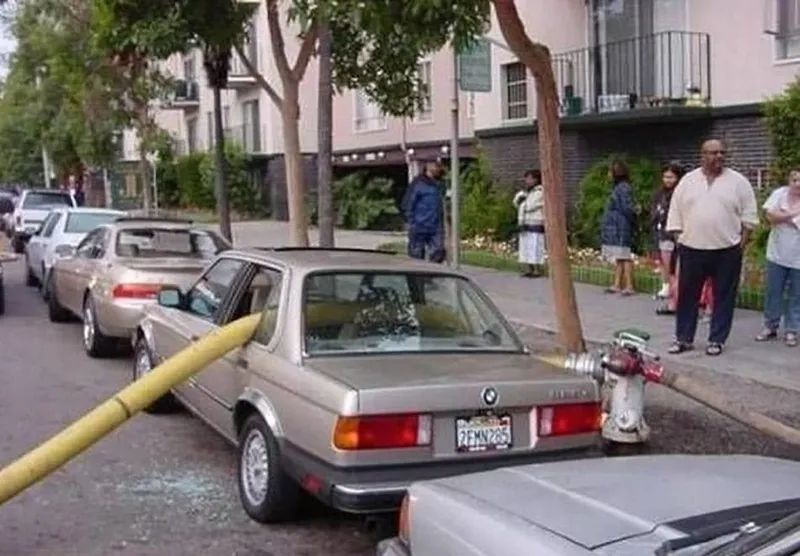 Hosing Around
The law about not parking in front of a hydrant exists for a reason. In case of fire, that hydrant will be needed to put it out. If you get caught, you will face a stiff fine, but another option is that there actually will be a fire. In that case, your car windows will be broken by the fire department to get the tube through so that they can use the water to put out the fire.

Guess this BMW should have considered all of that before parking illegally. 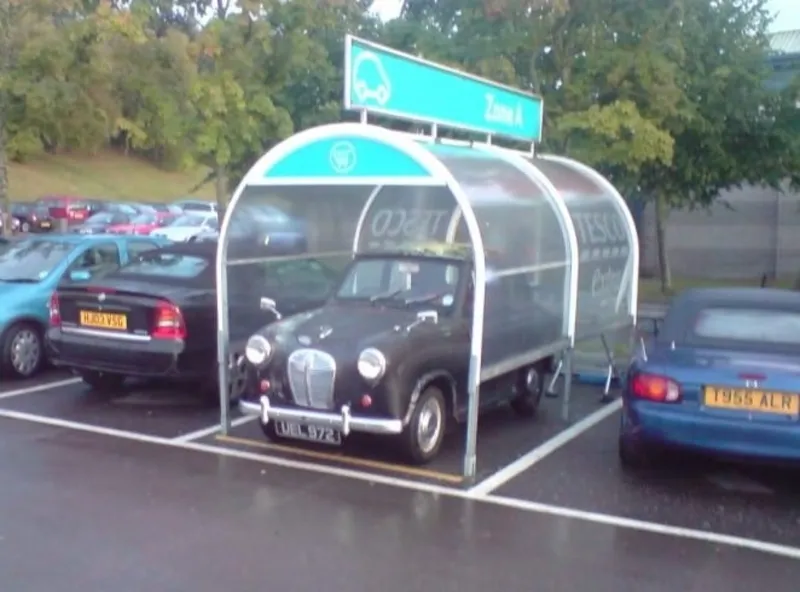 Grocery Store Car Protector
Driving a classic car is a genuine pleasure, but also a lot of responsibility. The cars are no longer being made, it is hard to find spare parts and not a lot of mechanics even have the know-how to take care of them. That seems to have made this driver extra paranoid about some rain getting on their antique car.

It's a good thing this supermarket provides special car protectors to keep your old car safe. That’s what this plastic booth is for, right? It couldn’t be for shopping carts, now could it?