The Most Hilarious Windshield Notes Left On Cars 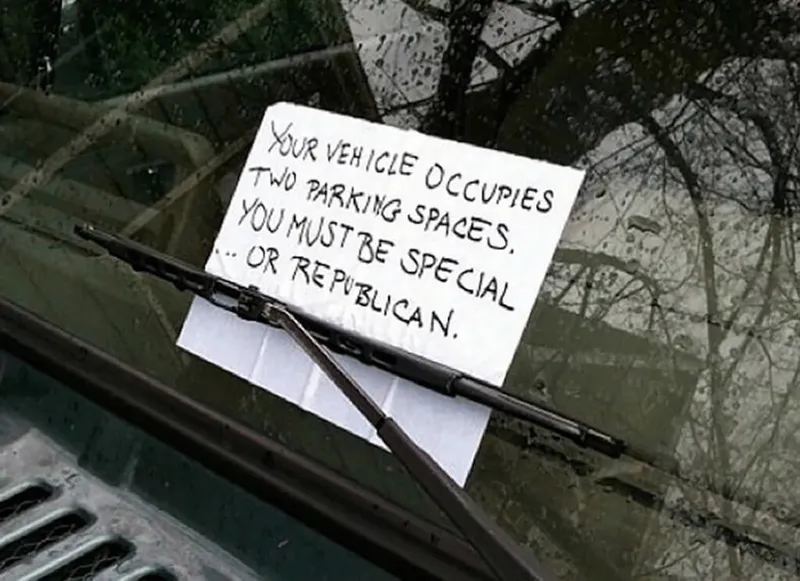 The Political Notes
It’s all fun and games until politics are involved. We’re curious to know which party the person who parked the vehicle actually affiliates with.
Also, this note looks more like a label that somebody has printed professionally and not simply designed at home… so we’re starting to get suspicious. 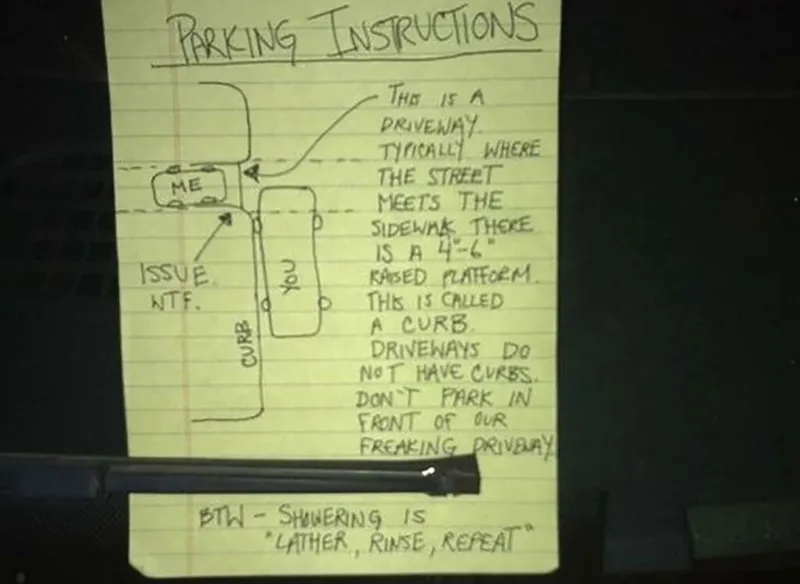 How-To-Guide on Parking
Wow. It’s no wonder that the owner of this home was so frustrated after coming home to find that he was unable to park in his driveway because somebody parked in front of it.
They were so aggravated by the situation that they wrote out parking instructions for the driver and even sketched a little map. 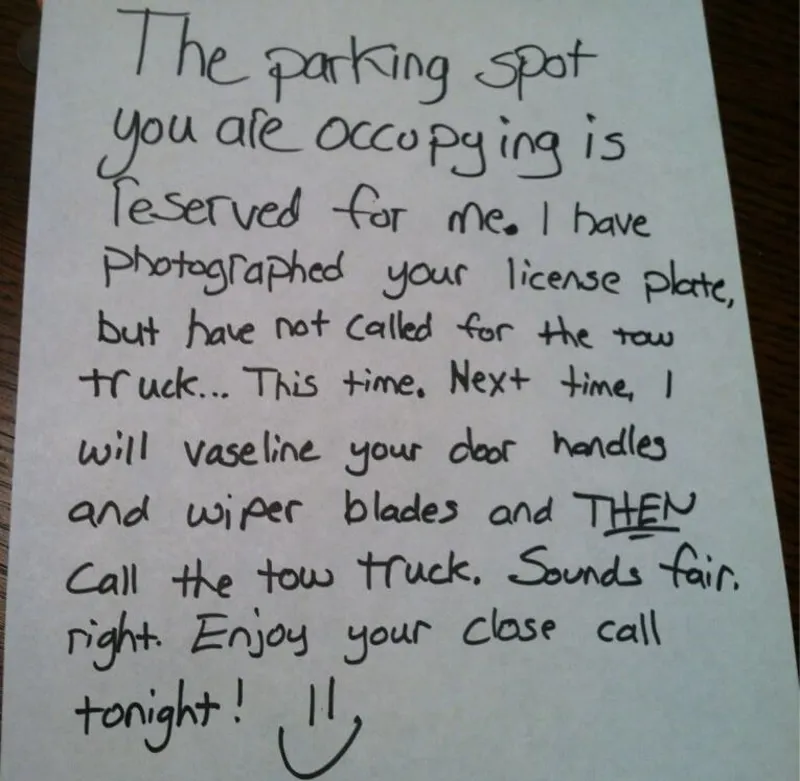 That Smiley Face Though
We imagine that this is the last time this person is going to park here. Consider yourself warned, which is what this note basically means.
The person who wrote this note is clearly passive-aggressive, but they also seem like they mean business and that they aren’t afraid to take action where and when it’s necessary. 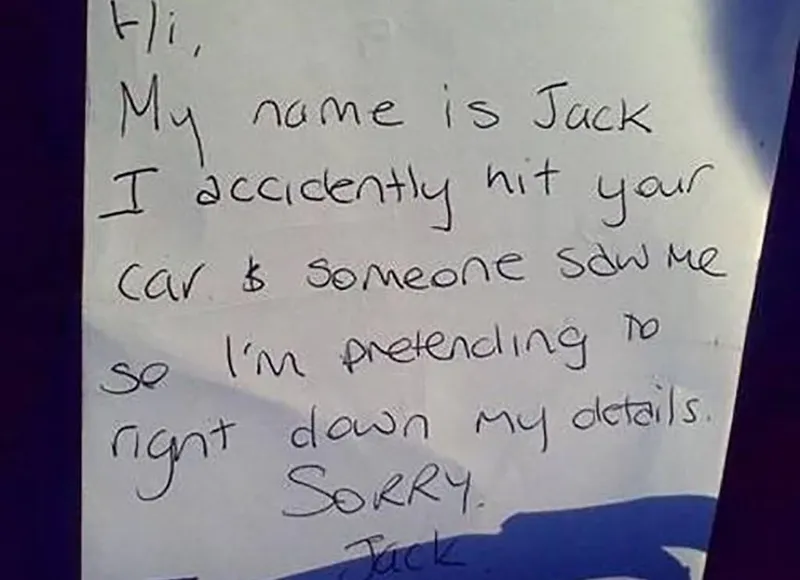 An Incomplete Confession
Wow, this Jack guy pulled off a move that’s even worse than a hit and run.
Although he left a note for the owner of the car confessing that he hit his car, he neglected to leave one pretty major detail; his contact information. And worst of all, he did this on purpose. 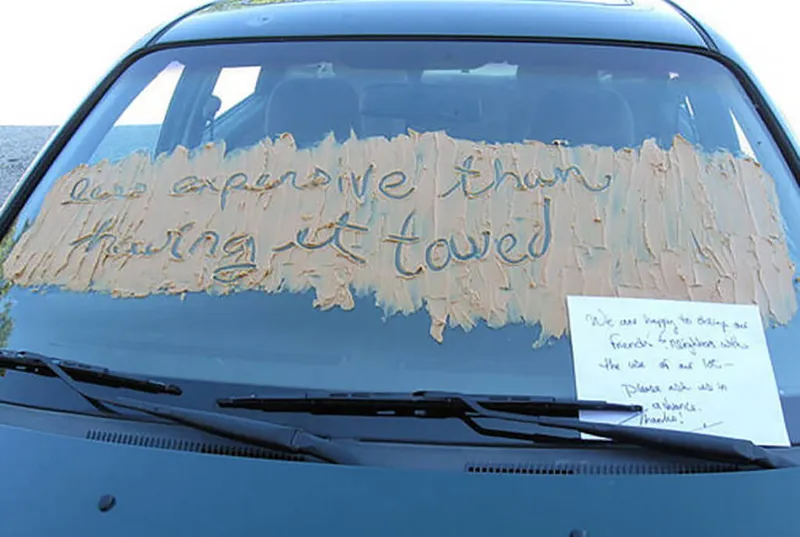 An Afternoon Snack
Although their message isn’t completely legible, we can imagine that the driver must have done something pretty bad to get the peanut butter treatment.
It seems like it’s going to take quite some time cleaning the peanut butter off of the car. 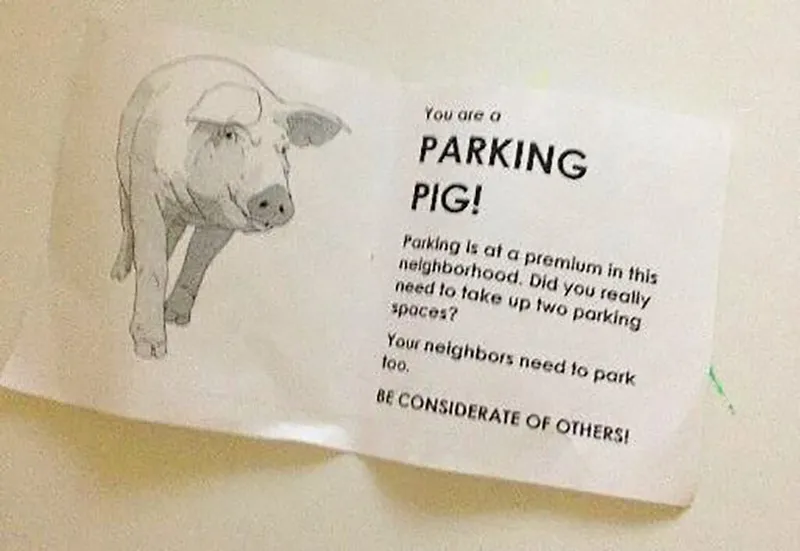 Parking Pig
If you live in this neighborhood then you better take good care of how you park.
Otherwise, you may end up as the pig of the neighborhood and the laughing stock of the internet. It seems like there’s a very crabby driver in the neighborhood who’s become quite the snitch. 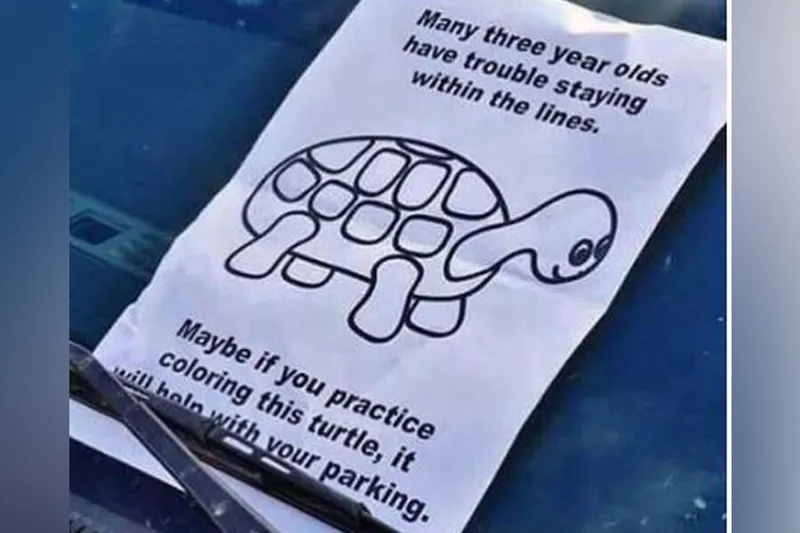 Coloring Page
Another genius parking note! This person thought that practicing coloring in the lines would help this person park better.
Although we are sure that they really meant this as a passive-aggressive nod and more like “you’re a sucky parker,” if we got this on our windshield, we would totally take it home and color it. 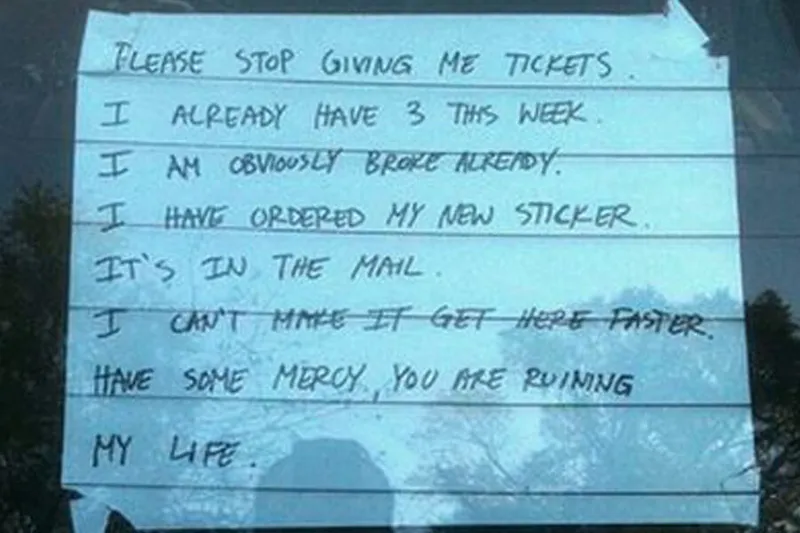 I’m Begging You
This note seems to be one that was left by the owner of the car himself. He’s in a pickle of a situation in which he’s waiting for his new parking sticker to arrive.
In the meantime, he uses some guilt-tripping to share that he is very broke and sick of getting ticketed over and over again. 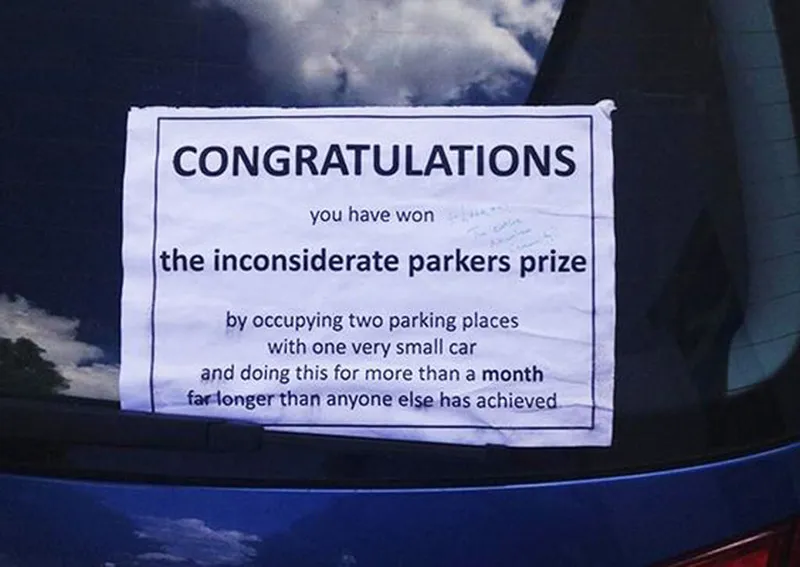 The Golden Ticket
This person is the winner of the coveted golden ticket! They should be so proud of themselves, says the very sarcastic and passive-aggressive person who left them this note.
We are just surprised that it took over a month for somebody to leave a note for this person! 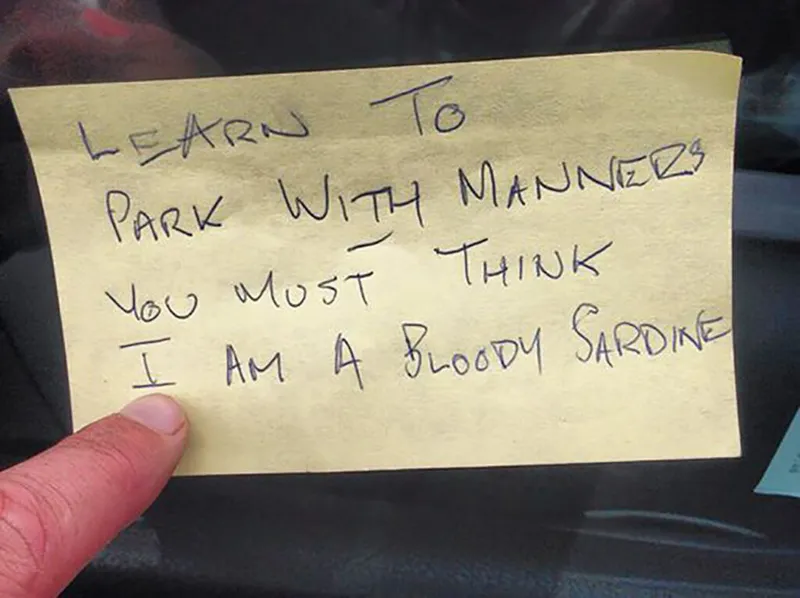 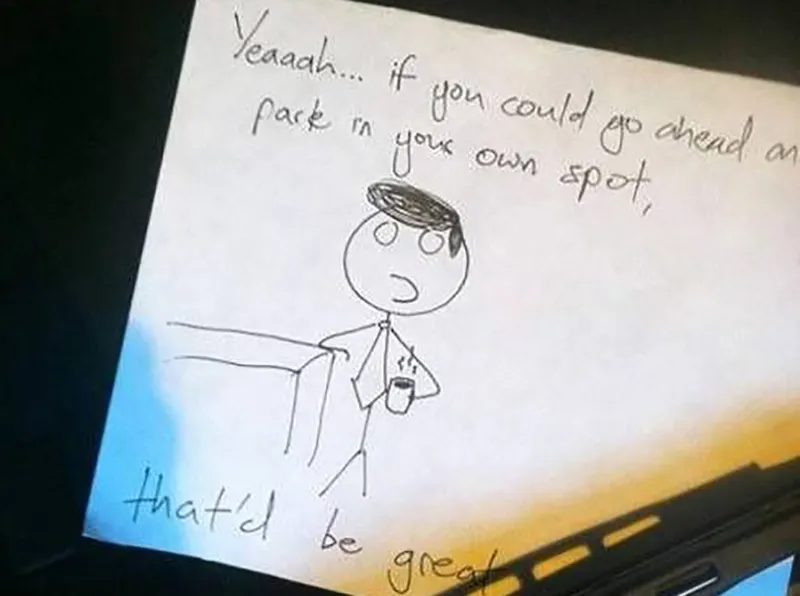 Office Space
If you didn’t get it, this is a reference to the comedy movie "Office Space." The scene from the movie depicted in this note has become a viral meme.
A lot of people would pick up on the reference but it would be pretty awkward if the person who parked their car didn’t understand it! 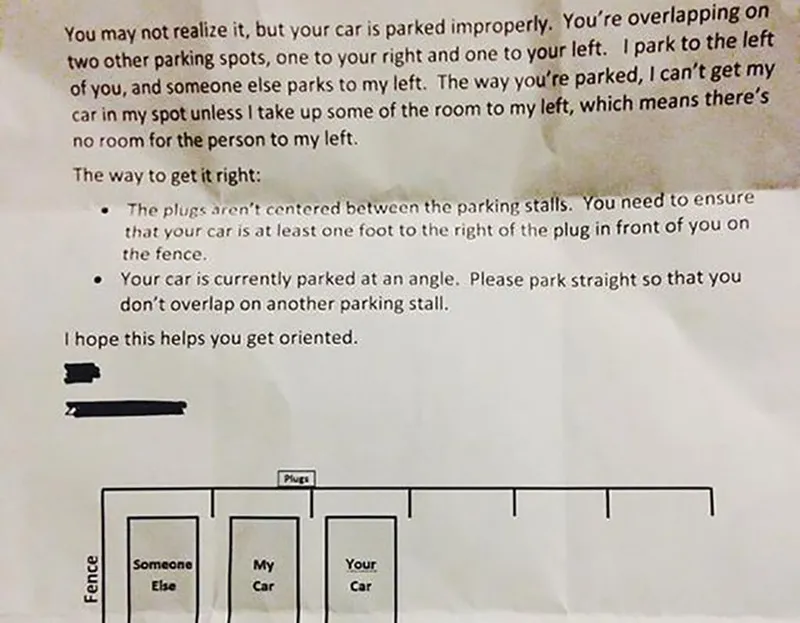 Here’s How It’s Done
This frustrated neighbor took it upon himself to explain to his parking neighbor how to properly park his car so as not to screw him over and the guy to the left of his spot.
He explains how it’s done in a very non-judgmental manner. 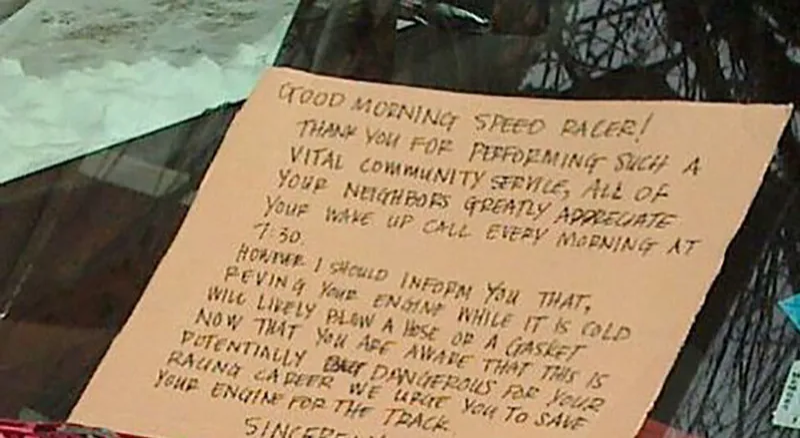 Save It For the Track
It's extremely rude and inconsiderate when somebody revs up their engine so early in the morning, all the while waking up their entire neighborhood. Why do people do this? Does it give them the sense that they’re cool?
It seems like the entire neighborhood has a problem with this person and we can understand why.

A Noisy Issue
Everybody has lived near somebody with a noisy vehicle at some point. There is nothing more frustrating than getting woken up by it in the middle of the night, or when it goes off and you’re trying to put your children to sleep.
What’s even more annoying is that the person doesn’t do anything to fix their car! 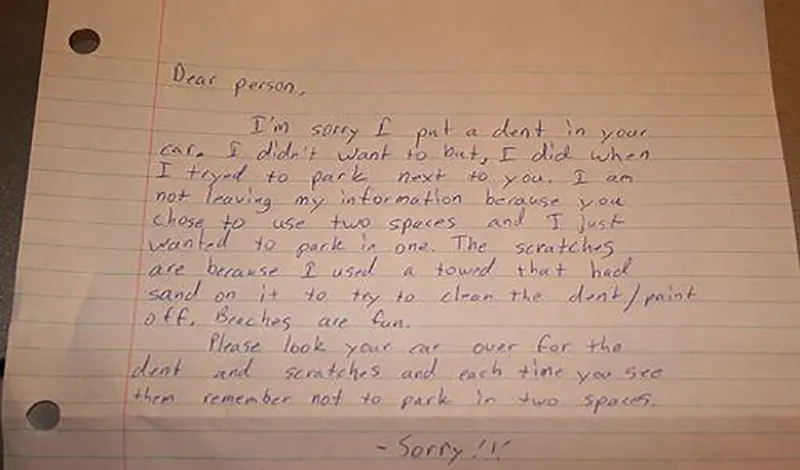 Park In Two Spots You Lose
Although it’s very obnoxious when people park in two spots and is deserving of a ticket, the person who wrote this letter is equally as obnoxious.
We aren’t saying that it’s okay to take up two spaces, but it’s also not okay to hit and run. Two wrongs don’t make a right. 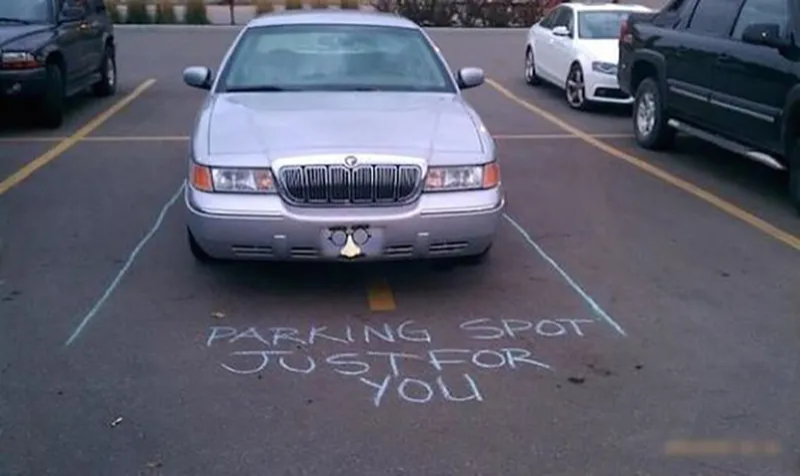 Mock shift Parking Spot
It would be beneficial to keep some chalk in the car so that in the case you see somebody trying to pull off a stunt like this, you’ll be ready.
This driver is inconveniencing at least two people and even more if they keep their car there for a while. Maybe this message will teach this driver a lesson. 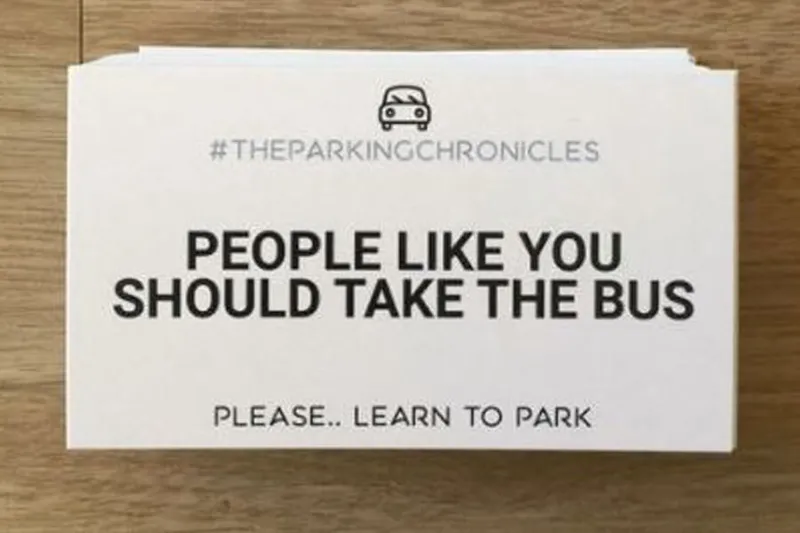 Public Trans for the Win
First of all, we totally believe that public transportation will solve a lot of world problems. And secondly, if more people rode the bus, there would be fewer horrible parkers out there.
The author of this note is proposing a good question here. Should bad parkers be forced to take the bus? 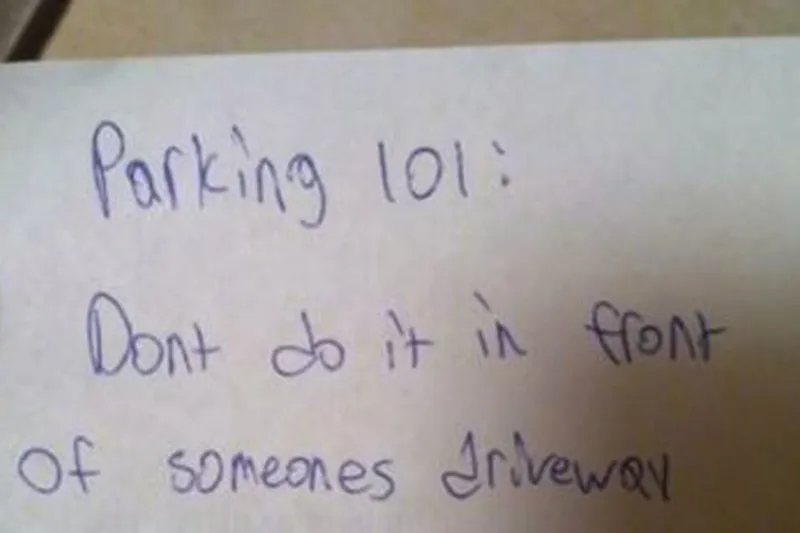 Step One
There are a few basic things you need to learn about driving. The first is the traffic symbols.
The second is about parking. Like, no parking in front of somebody else’s driveway. Apparently, this person needs a lesson on driving again. 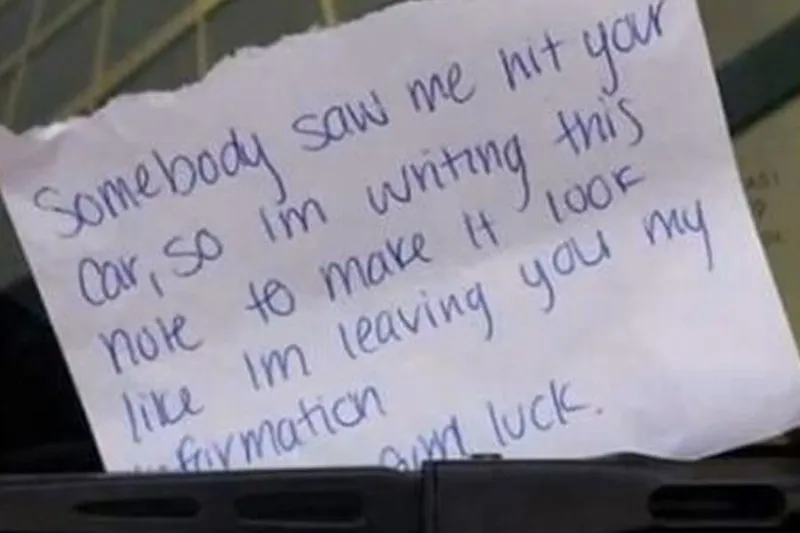 Scammers
How awful is this? It’s even worse than not leaving any kind of note. Do people live in such intense fear that their insurance will skyrocket? Or are people driving without insurance?
Whatever it is, there is no excuse to act like this! This is making me believe that the world is filled with many insolent chumps! 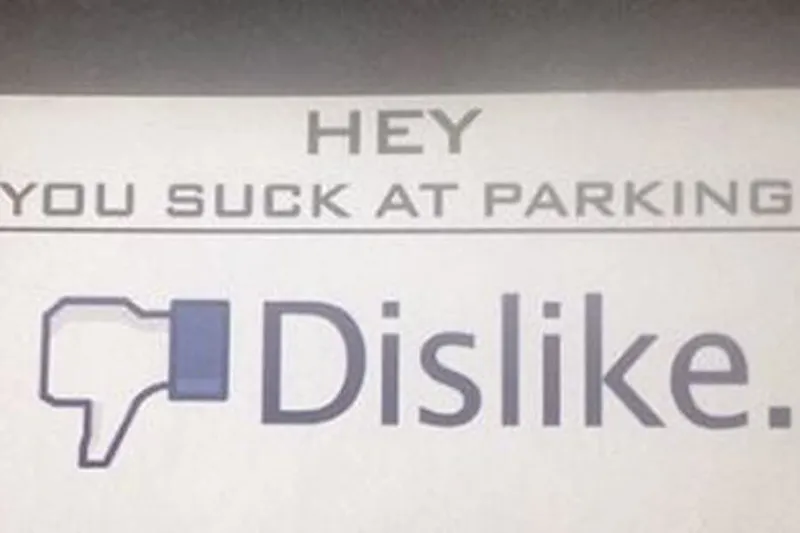 You Suck
A lot of people always say that they wish that there was a like and dislike button in real life. Well, hold your horses, there is now.
This person printed off a picture of the Facebook Dislike icon and is apparently using them where they are deserved, to rate people’s parking. This is very well-used.