Hilarious Headstones That Had Us In Stitches 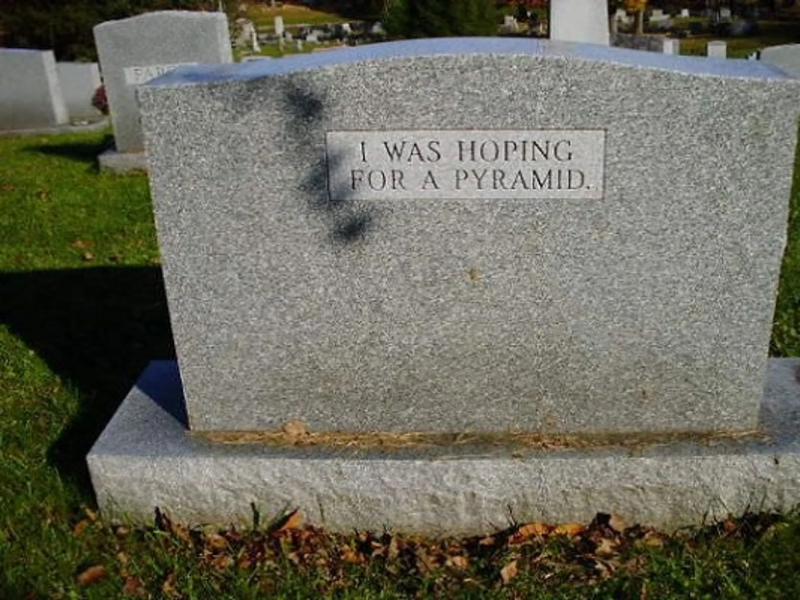 Walk Like an Egyptian
Egyptians are known to dream big, and after death, they commemorate their lives not just with a headstone but with a pyramid. Their grand lives are reflected in the hieroglyphics meticulously painted or carved in the pyramid’s walls, and even up to today, archaeologists are still trying to unearth pyramids and figure out what life was back then.

This headstone has grand dreams like our Egyptian ancestors and wanted to have a pyramid to reflect his grand life but had no choice but to settle for a pyramid-looking (ish) headstone. 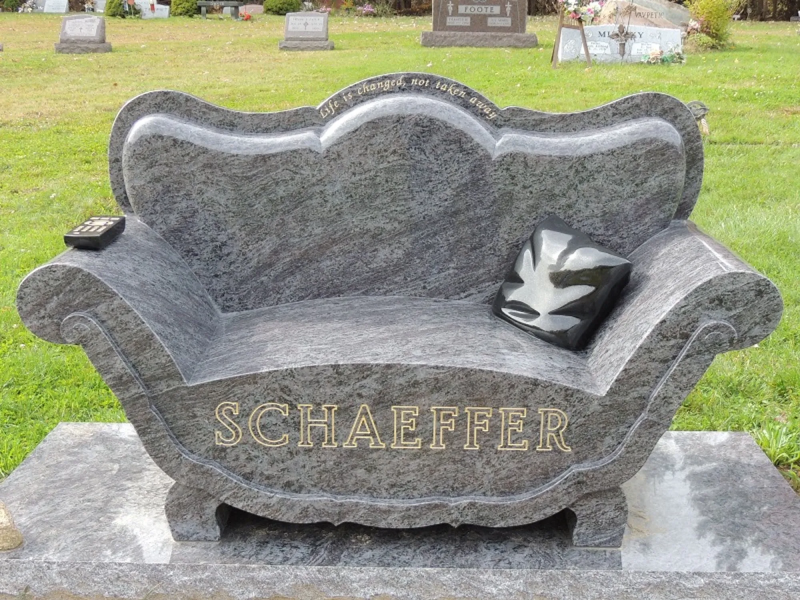 Did the person die in this chair? Is that the person’s favorite chair? Did that person want to have that chair before he or she died? Regardless of the answers, it is still a unique (and considerate) headstone for others to remember that person by. 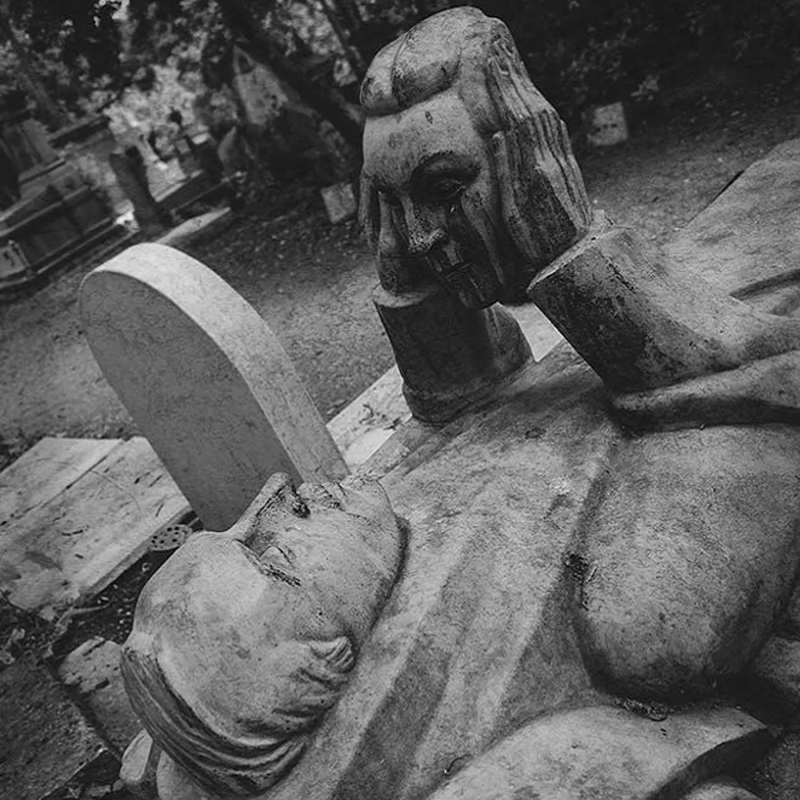 Literally, a Headstone
Headstones are meant to be something nice to remember a person by. With this headstone, however, this person took it to be literally a headstone.

Let us start with the person lying on his back holding another head. If the purpose of this headstone is to confuse people, then they have succeeded with flying colors. 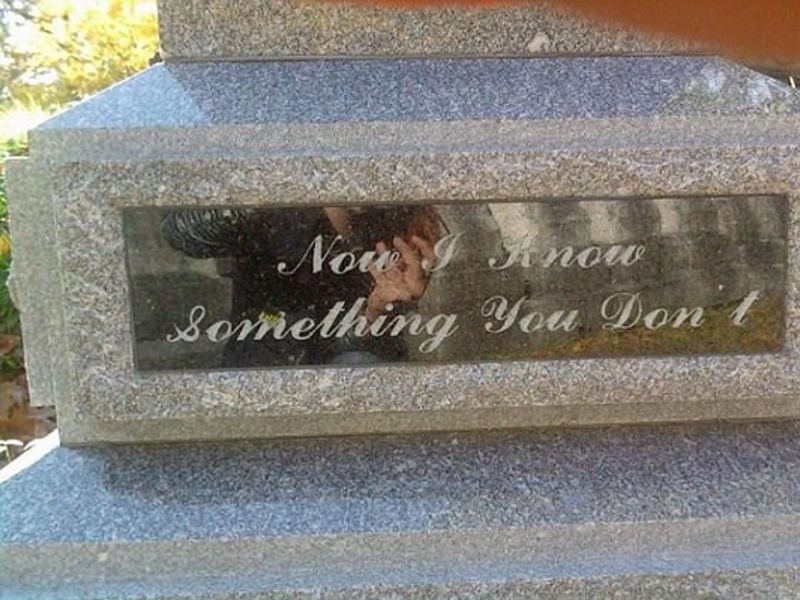 The Secret About the Afterlife
There are many theories about the afterlife – is there life after death? Do heaven and hell exist? Do we get reincarnated after we die?

Furthermore, I guess it is only the dead people who would know the answers to these questions. This headstone accurately depicts that, indeed, he or she knows something that we do not. 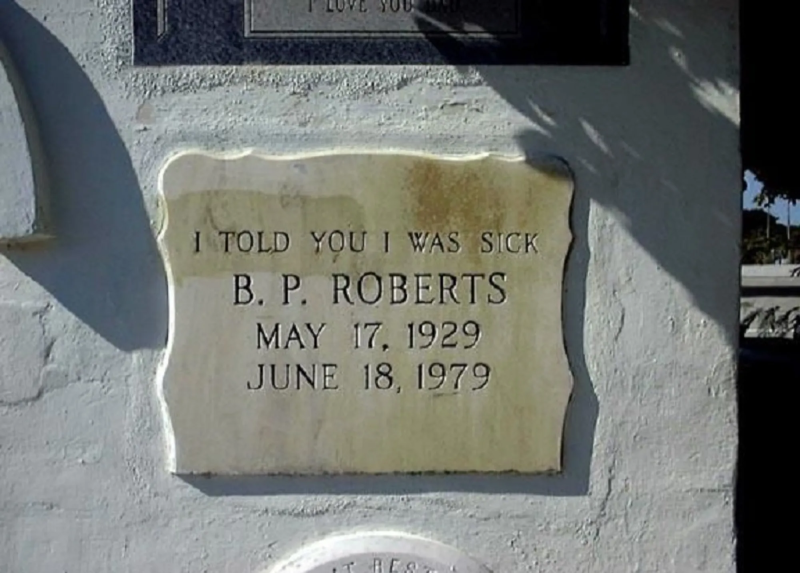 'I Told You So!'
Death often comes because of many untreated diseases. Though this headstone attempts to inject humor with death, it also reflects the journey of many patients in the hopes of becoming healthy.

This also reflects the society in general where because of the stigma for sick patients, others would deny that they are ill or ignore them. 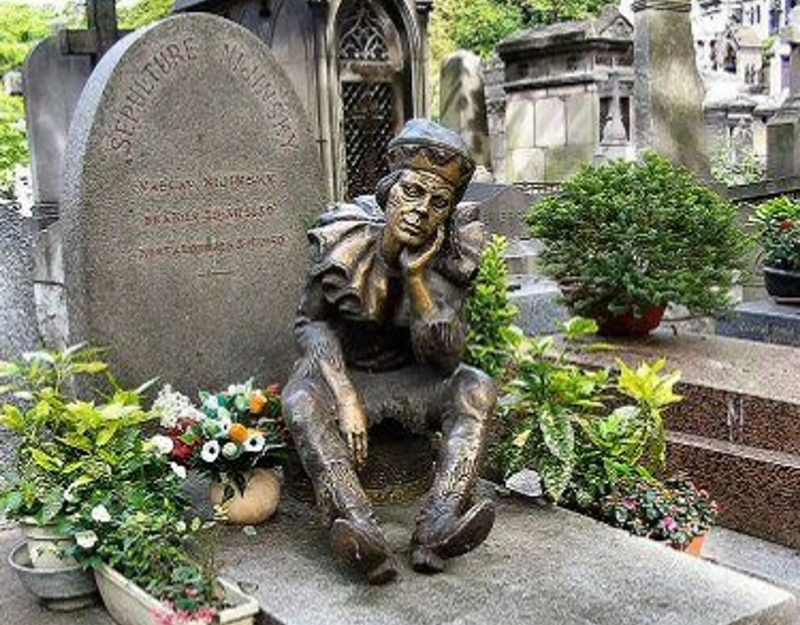 Who is That?
Some headstone would have religious icons or statues of angels to “guard” the spirit of whoever is buried underneath. For this headstone, however, we are still pondering on who exactly is that person. First, let us talk about his appearance.

He appears to be small and donned with jester-like or elf-like clothing, so maybe the person buried needs to be amused in the afterlife? His posture also says that he must be waiting for someone. Perhaps this is him waiting for the love of his life? We are a bit confused about this one. #ProudMama
Women take a loooong time to get ready. It seems like they shower for a whole hour, put on make-up, and fix their hair before you can even use the bathroom. Imagine raising four daughters with one bathroom, and you would imagine that there is instant chaos.

This Proud Mama, on the other hand, proudly told everyone through the inscription of her headstone that she was able to raise four beautiful daughters with only one bathroom. That in itself needs a gold medal. Way to go, mama! 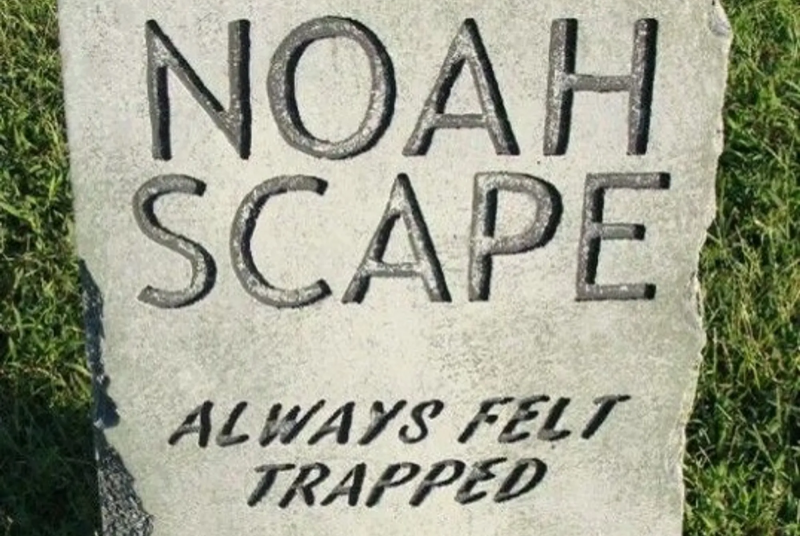 Wordplay
We are sure that you have met a person with an exciting wordplay name once in your life. The likes of Claire Annette or Lee King. Sure, Noah Scape had his fair share of name puns when he was alive.

However, the caption under his name was just a bit sad as it stated, “Always Felt Trapped.” It may be a funny reference to his name, but hopefully, he did not feel that way his entire life. 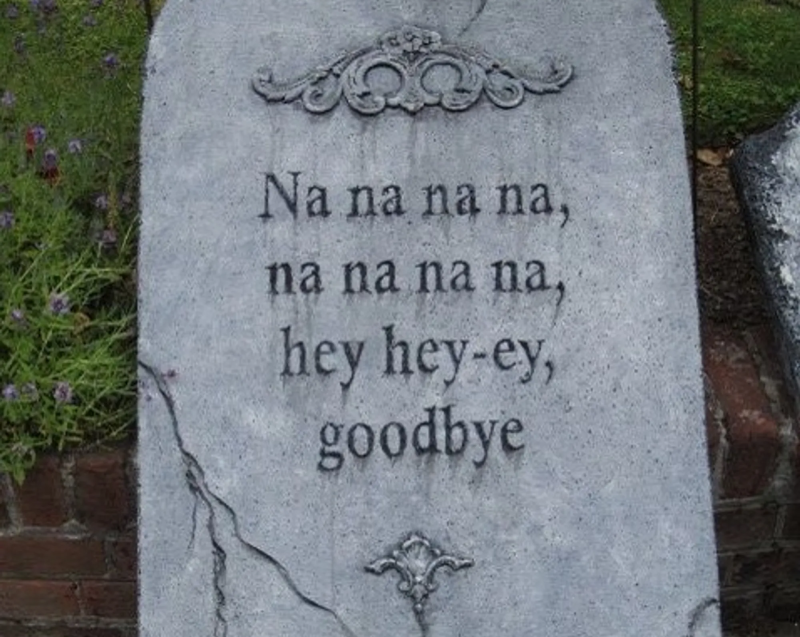 Hey Jude!
I would bet you that this person’s name was Jude with the song on his headstone. That or he is an avid fan of Steam.

This song is often heard in sports arenas where people would belt it out as loud as possible. Come to think of it, and it is a befitting song for some who passed away. 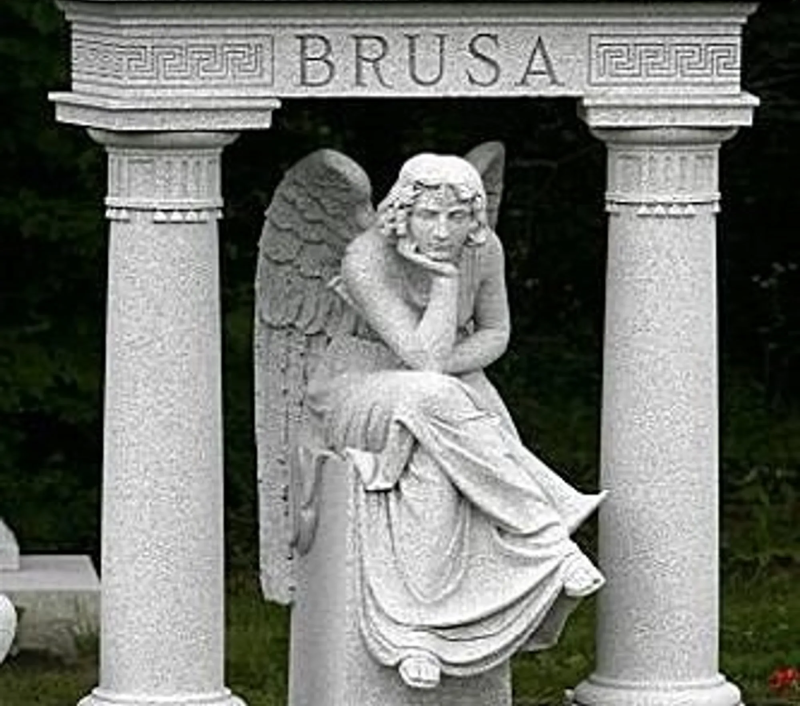 Bored Angel
The angel is a depiction of perfection, kindness, and everything good. Therefore, there are many angel statues usually found in a headstone. I am sure, however, that angels might have their off days too.

This bored-looking angel seems impatiently waiting for the day to stop guarding headstones and go to heaven with her angel friends. Hang in there, angel! 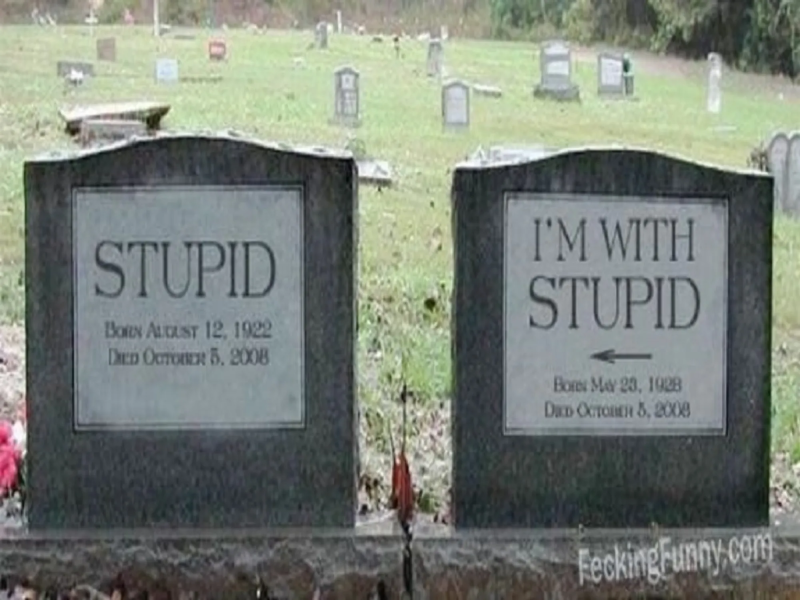 Couple headstones?
A couple of shirts are all the rave back in the early 2000s. Who would not want to express their love to the world through cute, often cliché shirts?

However, this couple decided to take their humor beyond the grave and had a couple of headstones with the ironic “I’m with Stupid” with an arrow pointing to each other. How cute! 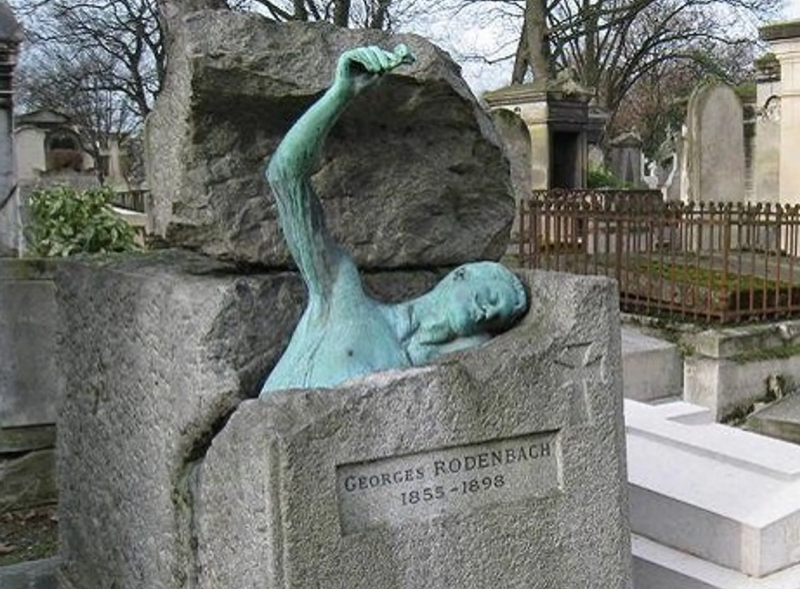 I am Confused?
While plenty of headstones will make you smile with a witty one-liner, other headstones are just plain confusing. Take, for instance, this headstone.

First off, the statue looks like he is asleep, but he has one arm upwards while holding a rose, which signifies that he probably likes roses? That he is dreaming of roses? Furthermore, what is up with that curvy upper lip or mustache? So many questions unanswered. Lazy Bum
We all know that lazy people like to lounge around the house all day and not do anything productive.

While this headstone might be a tad bit hurtful (because who would want to be labeled a Lazy Bum even after they are dead?), it certainly catches your attention. Zero points for creativity, though – the phrase is seen all over the internet. 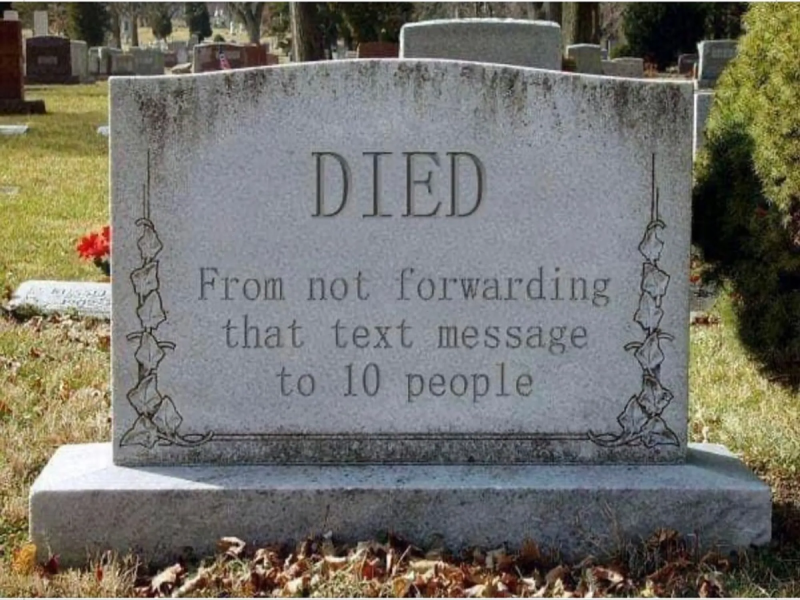 Cause of Death: Chain Messages
Have you ever received a chain message back when cellphones were new, and it just said that you had to forward this message or else you would die?

This is what happens when you don’t! Better be safe than sorry next time, guys, and just forward the message. You do not want to end up like this poor guy.

Honesty is the Best Policy
They say that it is okay for you to make a mistake if you are aware of it and not repeat it.

Though honest, this person must have realized it a tad bit too late because his mistake cost him his life. Oh, dear! Honesty is still the best policy, though!