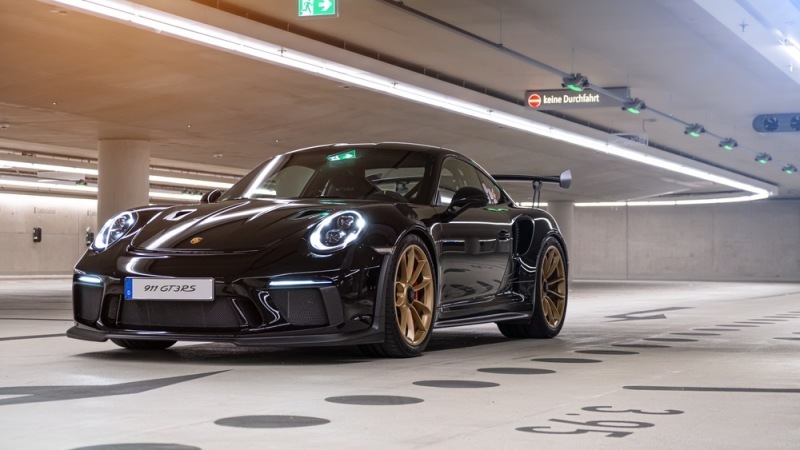 Audio und werbung / Shutterstock.com
30. 2016 Porsche 911 GT3 RS (991)
The engine in the 2016 Porsche 911 GT3 RS is a 4.0-liter engine based on a 3.8-liter flat-6 but with a new intake system. It can produce 493 horsepower at 8,250 rpm as well as 388 pound-feet at 6,250 rpm. To enhance this auto’s performance, Porsche also included Turbo-body side intakes, a wider body, and other aerodynamics elements like adjustments to the rear wing angle and size and the front-fender exits. The official top speed is 202 miles per hour. The 30th fastest production car in the world sure is a beauty. 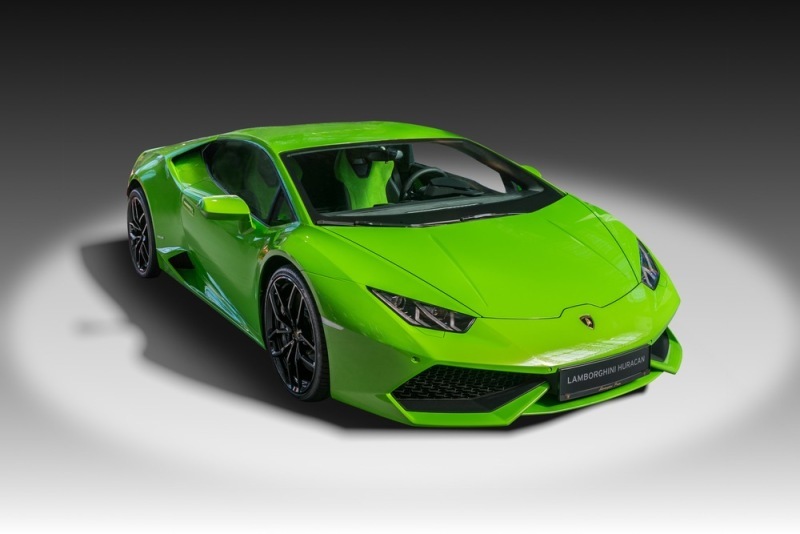 vchal / Shutterstock.com
29. 2015 Lamborghini Huracan
The 2015 Lamborghini Huracan has a top speed of 202 mph, more than you are likely to be able to use without a racetrack. The engine is a V10 that generates 602 horsepower, working with a 7-speed dual-clutch automatic that is the first gearbox of this type from Lamborghini. Independent testing reached 60 mph in 2.5 seconds and finished a quarter-mile in 10.4 seconds while driving at 135 horsepower. Interior switches are reminiscent of a jet fighter and control a 12.3-inch infotainment display. 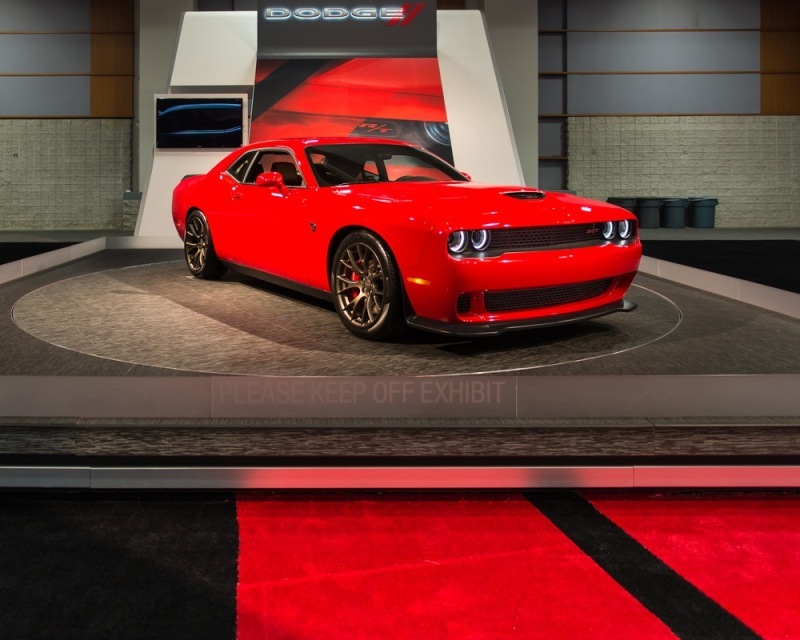 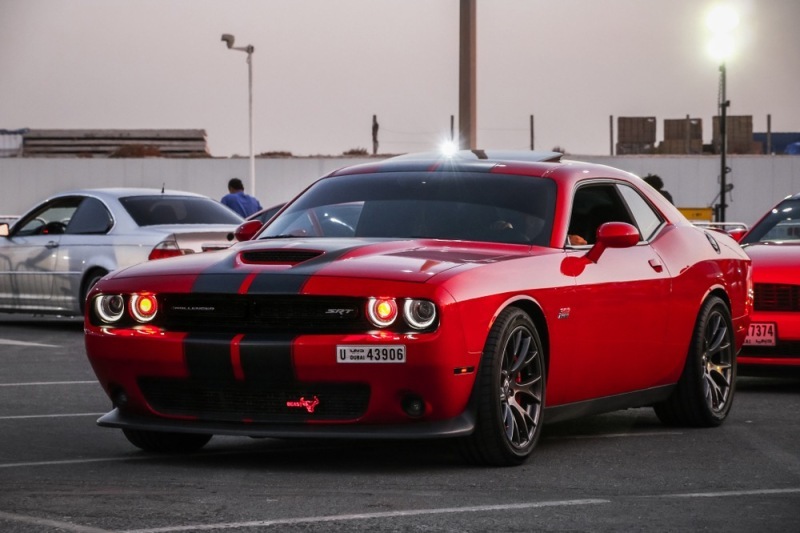 Art Konovalov / Shutterstock.com
27. 2018 Dodge Challenger SRT Demon
The 2018 Dodge Challenger SRT Demon delivers 840 horsepower and torque of 770 pound-feet. It just needs 2.3 seconds to reach 60 mph and 5.1 seconds to reach 100 mph. The quarter-mile only takes 9.65 seconds at 140 mph. It features a 6.2-liter supercharged V8 engine along with aerodynamic bodywork. This was the first factory production auto that offered an engine control computer with special calibration to let drivers use 100-plus-octane race gas. It also holds the title of first production auto to feature a liquid-to-air intercooler chiller system. 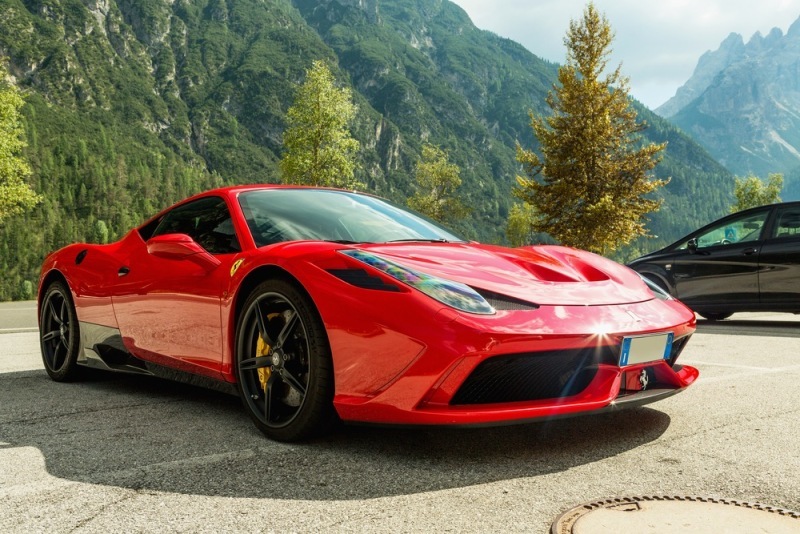 Nadezda Murmakova / Shutterstock.com
26. 2016 Ferrari 488 GTB
The 2016 Ferrari 488 GTB features the F154 engine, which is a more powerful variation of the one found in the California T. This 3.9-liter engine produces 661 horsepower and 561 pound-feet of torque. It works with a 7-speed dual-clutch automatic that features manual-shifting mode. This Ferrari also dropped weight and features aerodynamic styling via engineering in a wind-tunnel. Features like curved air gates and a blown spoiler contribute to a top speed of about 205 mph, based on independent testing. 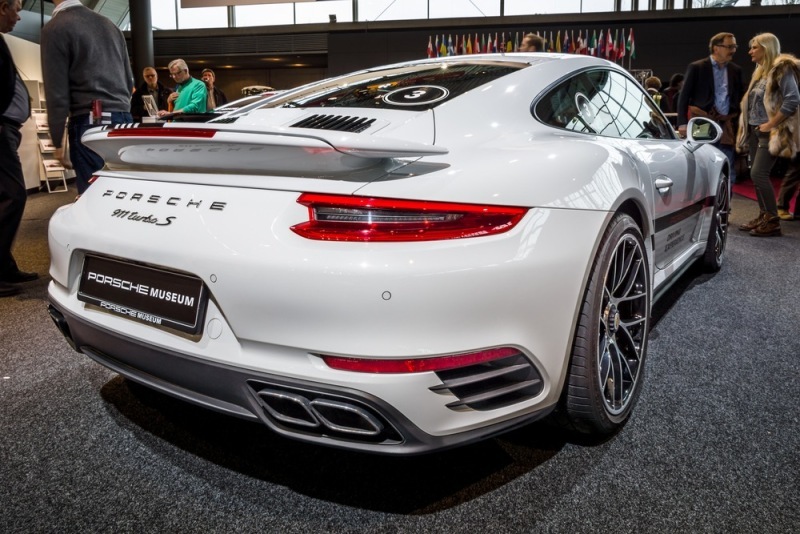 Sergey Kohl / Shutterstock.com
25. 2016 Porsche 911 Turbo S 991
Clocking in as the 25th fastest production cars in the universe, this beauty is able to reach an impressive 205 mph, the 2016 Porsche 911 Turbo S has an official zero-to-62 mph time of 2.9 seconds. In the right conditions, however, you can reduce this by a few tenths of a second. It has a seemingly familiar 3.8-liter 6-cylinder engine but with higher fuel pressures, larger variable geometry turbos, and revised inlet ports. This auto also has a four-wheel drive system with an electro-hydraulically operated clutch pack that acts quicker for faster access to torque. 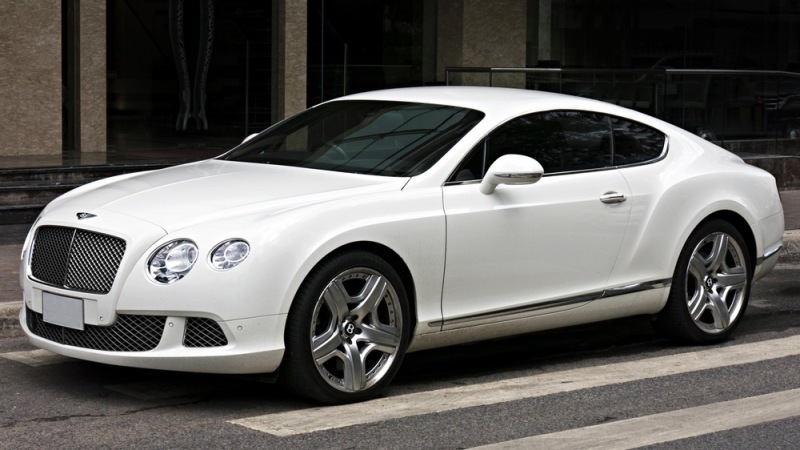 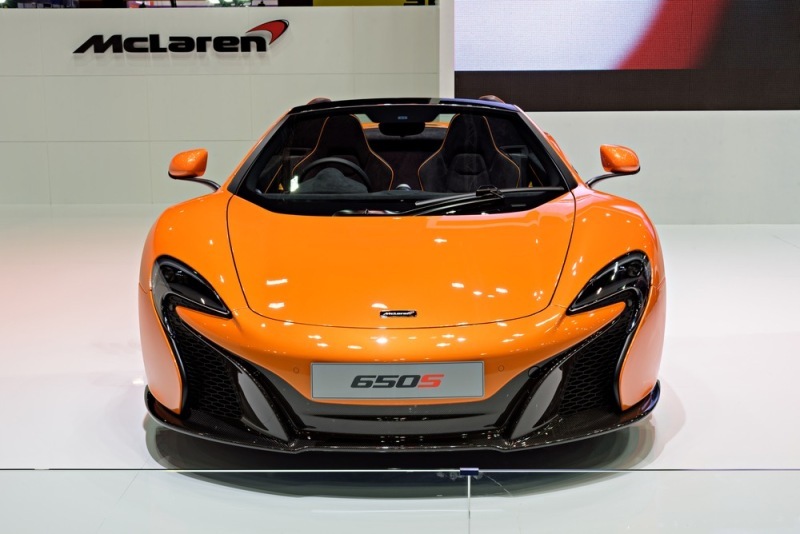 Foto by M / Shutterstock.com
23. 2015 Mclaren 650S
The 2015 McLaren 650S delivers 641 horsepower at 7,250 rpm and 500 torque at 6,000 rpm. The 3.8-liter turbocharged V8 works with a 7-speed automatic transmission. Anyone who has gotten a chance behind the wheel agrees that the McLaren 650S has excellent handling, strong acceleration, and a lack of body roll. Track, Comfort, and Active settings let you adjust the aero and suspension of the auto. In independent testing, it reached 207 mph and only needed 2.8 seconds to reach 60 mph from a standstill. 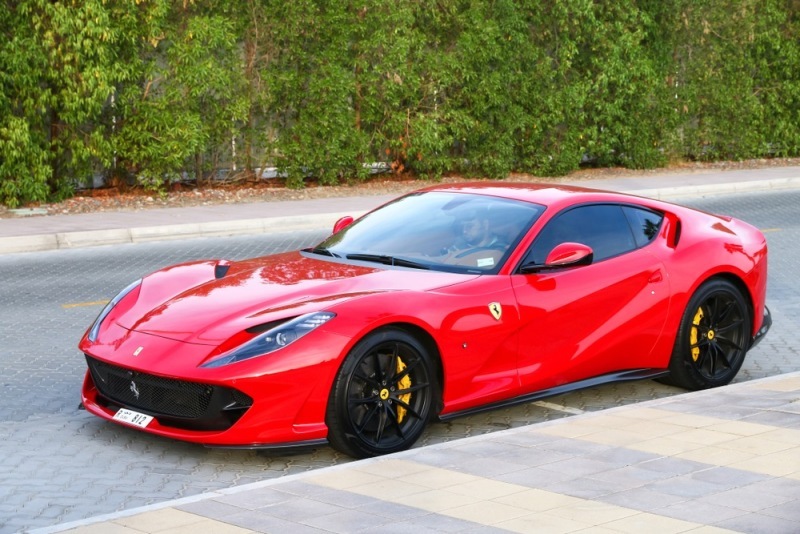 Art Konovalov / Shutterstock.com
22. 2018 Ferrari 812 Superfast
The 2018 Ferrari 812 Superfast can hit a top speed of 211 mph and needs 2.9 seconds to go from zero to 62 mph. This capability comes from its 6.5-liter V12 with 789 horsepower and 530 pound-feet. The paddle shifters keep the driver in full control of the 7-speed dual-clutch transmission. At the time of its release, automotive reviewers indicated that the Superfast had almost too much power to drive on public roads as you cannot take full advantage of it. 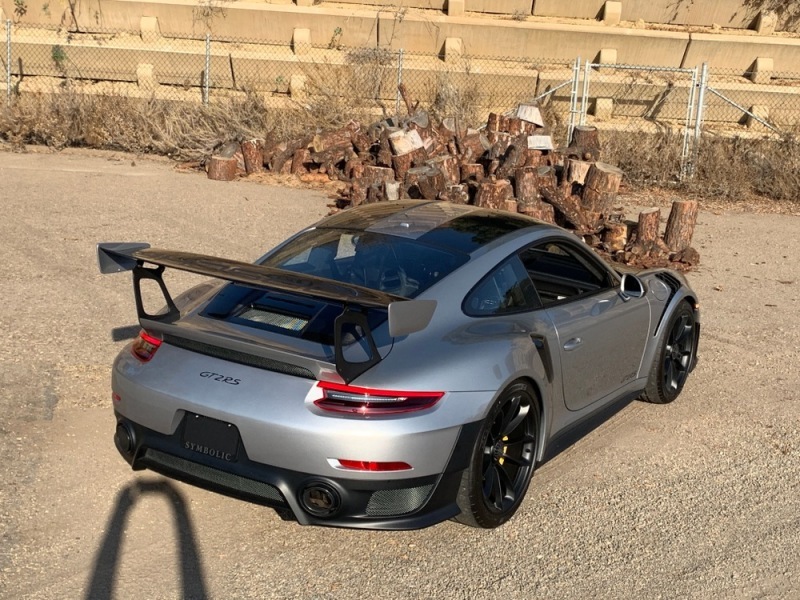 Fariz Abasov / Shutterstock.com
21. 2018 Porsche 911 GT2 RS 991
The 2018 Porsche 911 GT2 RS puts you in control of 700 horsepower. That power comes from a 3.8-liter flat-6. To achieve that output from a 3.8, the GT2 RS features larger turbochargers, a modified engine crankhouse, and unique pistons. The auto is light thanks to the use of carbon fiber throughout. You can also find a version with carbon-fiber sway bars featuring carbon-fiber end links. There are also standard ceramic brakes. Reaching 60 mph takes 2.7 seconds and a quarter-mile takes 10.5 seconds. 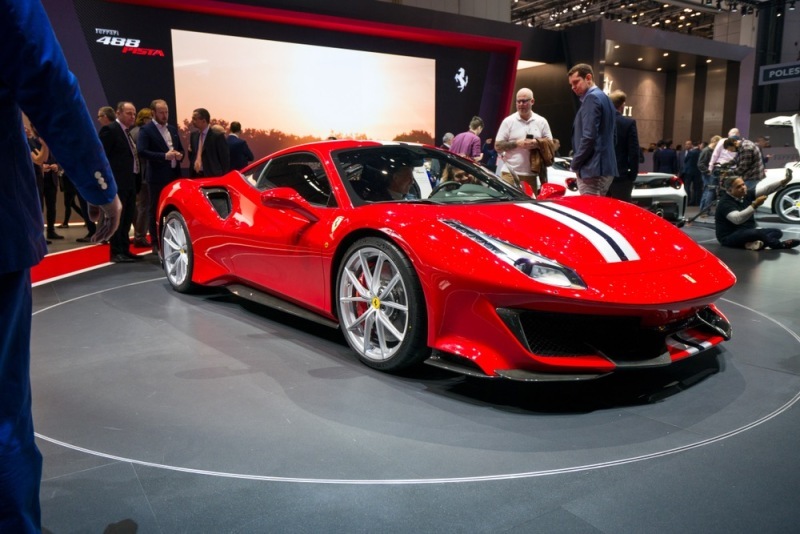 Sam Moores / Shutterstock.com
20. 2018 Ferrari 488 Pista
The 2018 Ferrari 488 Pista is the 20th can reach speeds of 211 mph and only needs 7.6 seconds to get up to 123 mph. The Ferrari engineers applied additional downforce and reduced the weight to enhance its performance. Part of this comes from the S-duct in the nose of the auto, combined with the underbody front diffusers and new winglets. The tail spoiler is also elongated. The 2018 488 Pista produces 710 bhp and 568 pound-feet and can weigh 90 kilos less than the 488 GTB. One of the fastest production cars in the world. 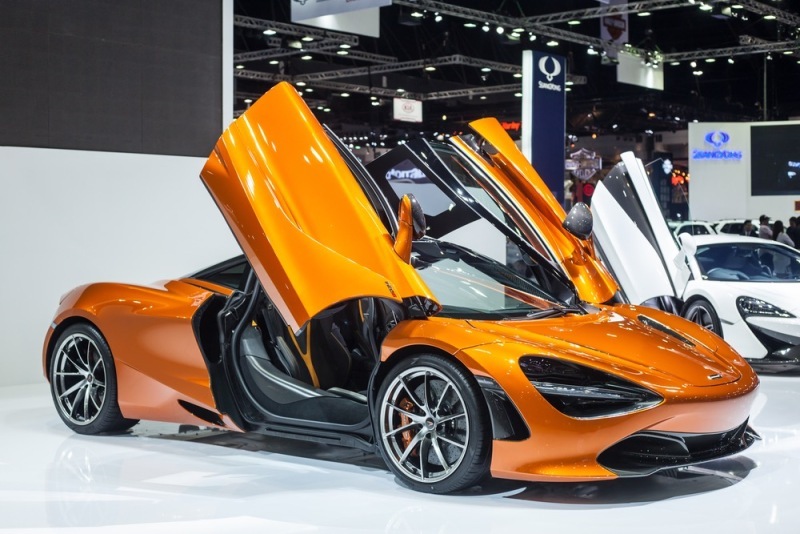 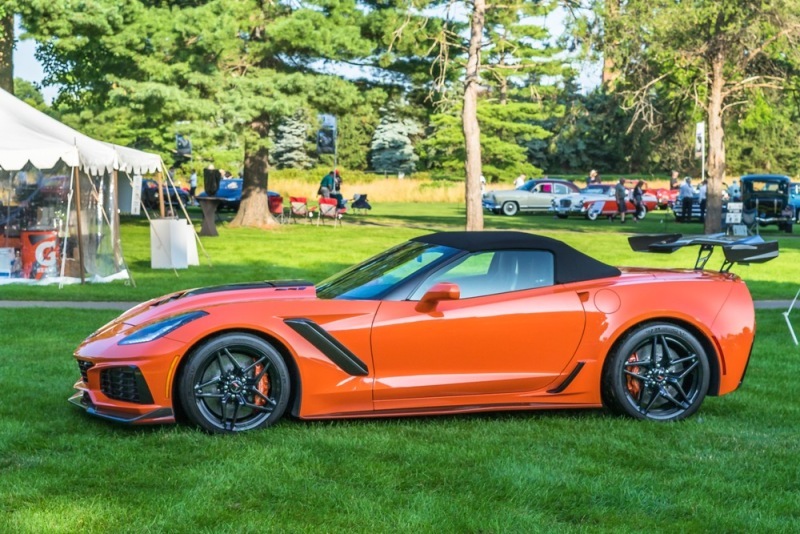 Steve Lagreca / Shutterstock.com
18. Chevrolet Corvette ZR1
A whopping 755 horsepower supercharged 6.2 liter, V8 engine engine puts the Chevy Corvette back in the spotlight. It’s 212 mph top end is enough to put it into the top 20 fastest cars in the world. Among the fastest production cars ever made! 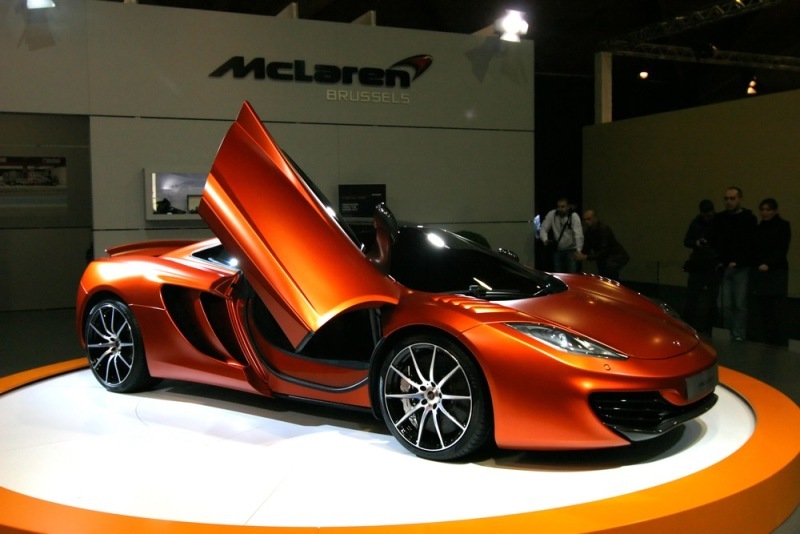 Artem Kliatchkine / Shutterstock.com
17. 2011 McLaren 12C
The 2011 McLaren 12C is an iconic supercar that was well worth the wait in the mind of automotive enthusiasts. Many considered the 12C to be McLaren’s first proper sports car following the 1994 F1. It weighs 1,434 kilograms and produces 592 bhp and 443 pound-feet of torque. It only needs 3.3 seconds to hit 62 mph, which reduces to 3.1 seconds with the Pirelli Corsa rubber. The official top speed is 207 mph, although testers have gotten the Spider up to 215 mph. 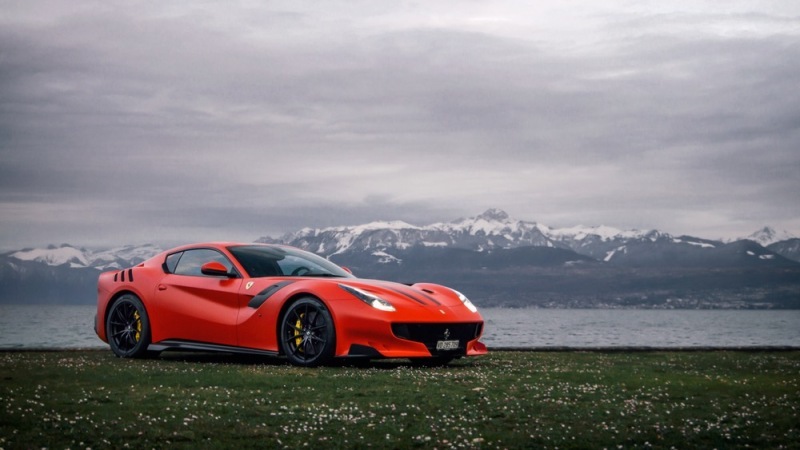 dimcars / Shutterstock.com
16. 2016 Ferrari F12tdf
The 2016 Ferrari F12tdf is less nimble than some of the other autos on this list, but it still has the performance abilities and top speed to fit in perfectly. The automobile runs courtesy of its 6.3-liter V12 engine with 769 horsepower. Compared to the standard F12, the F12tdf gets an extra 11 pound-feet and 39 horsepower courtesy of several minor upgrades. It can reach 60 mph in only 2.8 seconds and in independent testing, it hit a top speed of 215 mph. 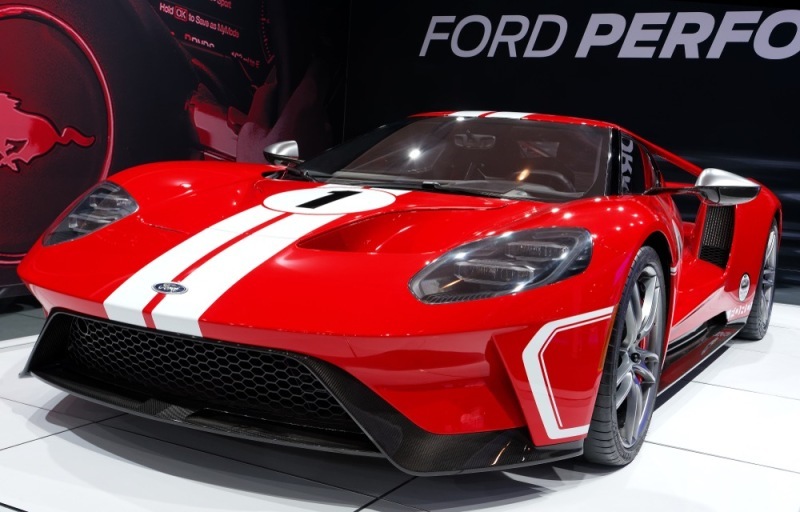 Zoran Karapancev / Shutterstock.com
15. 2018 Ford GT
The legend has returned, this time with an updated supercar frame and an impressive set of machines under the hood. Most notably, the 647-horsepower 3.5L EcoBoost V6 engine. The fact a V6 is powering the GT to a top speed of 216 mph is a testament to the vehicles aerodynamic shape and extensive wind tunnel testing. The list of fastest production cars in the world would be remiss without the Ford GT! 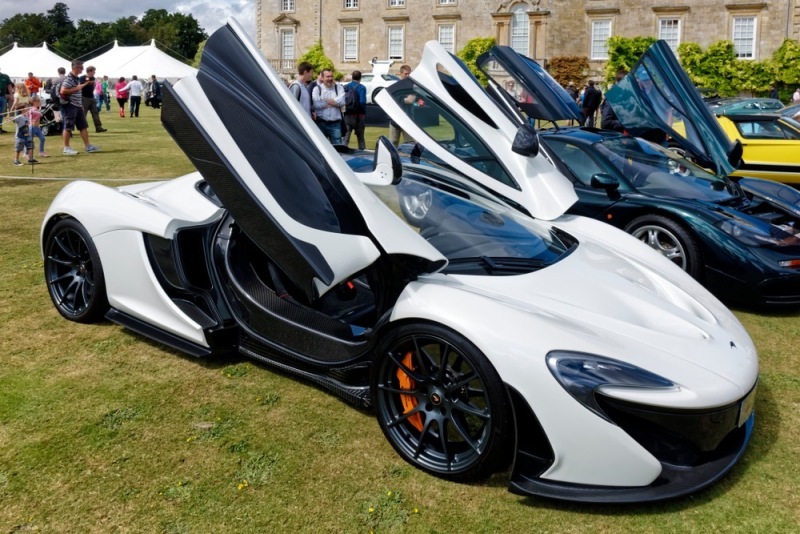 Andrew Harker / Shutterstock.com
14. 2014 McLaren P1
The 2014 McLaren P1 cost $1.15 million at launch and production was limited to just 375 models. Those who can get their hands on one, however, are in for a treat with its 903 horsepower, 664 pound-feet of torque, and electronically limited top speed of 217 mph. It needs less than three seconds to reach 62 mph and less than 17 to reach 186 mph. The mechanics of the auto combine the McLaren twin-turbo V8 with hybrid components and a 7-speed dual-clutch automatic. 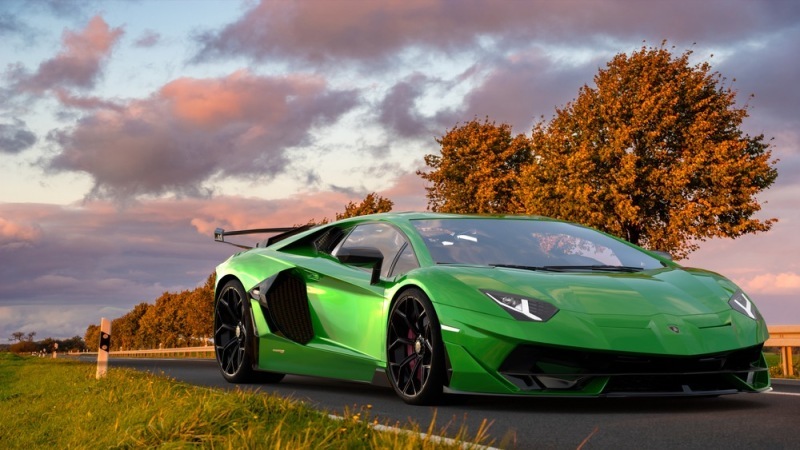 Mike Mareen / Shutterstock.com
13. 2019 Lamborghini Aventador SVJ
The 2019 Lamborghini Aventador SVJ or SuperVeloce Jota runs on a 6.5-liter V12 engine with natural aspiration, 531 pound-feet of torque, and 760 horsepower. Control the mechanics on this two-door coupe with the 7-speed auto-clutch manual transmission. It features active aero vectoring, active aero, all-wheel steering, and an all-wheel drive. It just needs 2.5 seconds to reach 60 mph and 10.3 seconds to complete the quarter-mile at 136.4 mph. It also has enhanced aerodynamic profiles that help achieve these impressive times. 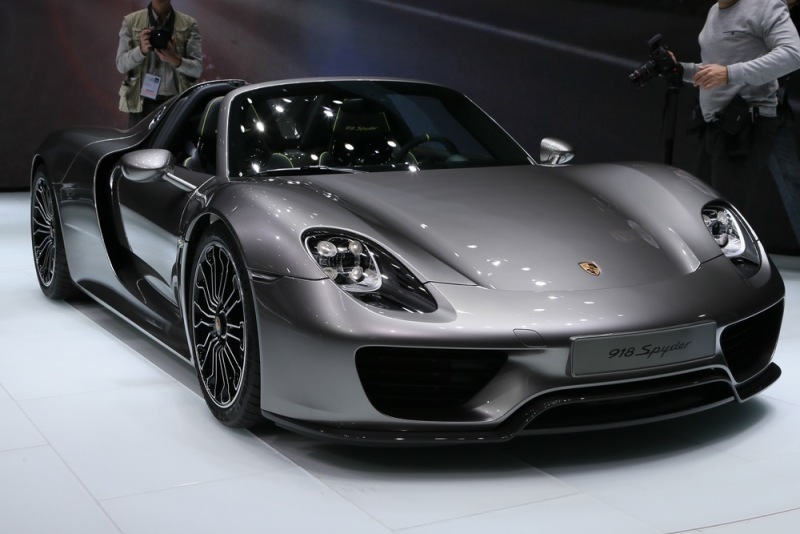 Fingerhut / Shutterstock.com
12. 2014 Porsche 918 Spyder
All-new for the 2014 model year, the Porsche 918 Spyder delivers hybrid tech and hypercar performance. It has a 4.6-liter V8 powertrain that produces 608 horsepower plus two electric motors with 125 and 154 horsepower, respectively, for the front and rear wheels. The 7-speed PDK automatic transmission lets you hit 60 mph in 2.6 seconds. It can run on electric-only power for 20 miles or has a full range of 420 miles according to the EPA. The top speed is an impressive 218.4 mph in independent tests or 120 mph officially. 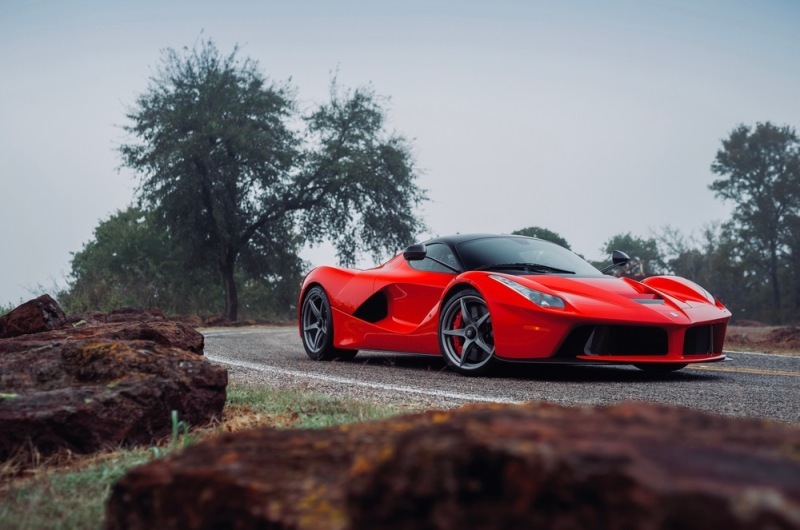 Jack Skeens / Shutterstock.com
11. 2015 Ferrari LaFerrari
The 2015 Ferrari LaFerrari was an all-new auto with a unique see-through hood panel behind the driver’s seat so you can view the mechanical components in action. Its 6.3-liter V12 delivers 789 horsepower while an electric motor contributes 161 horsepower for a combined 950 horses. It comes standard with a 7-speed dual-clutch automatic transmission and rear-wheel drive. Together, this setup lets you reach almost 220 mph and hit 60 mph in less than three seconds. That performance is supplemented by an eye-catching appearance. 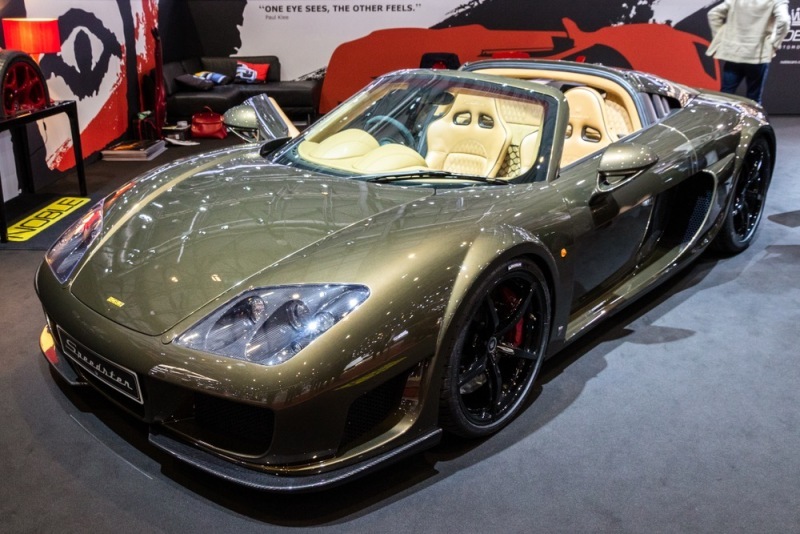 auto-data.net / Shutterstock.com
9. Pagani Huayra
Named after a South American wind god, this one-of-a-kind beauty is about as fast as the wind….or maybe even faster. The Huayra reaches 238 mph, thanks to its 6 liter 60-degree, twin turbo V12 engine. Out of all the fastest production cars in the world, this one has one of the more unique designs. 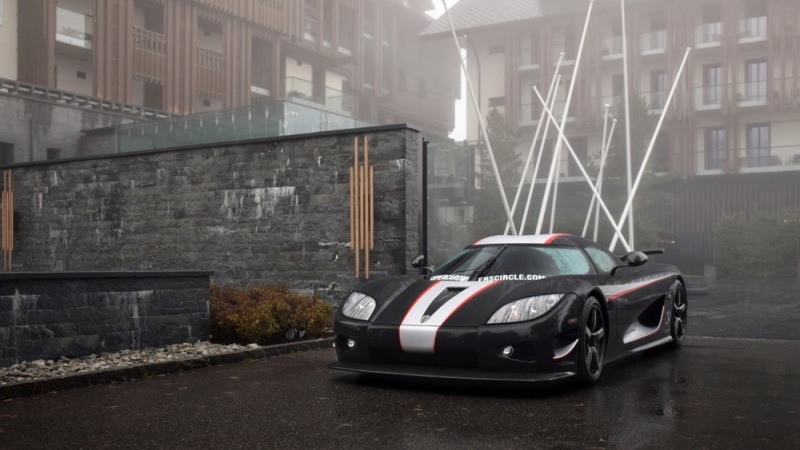 dimcars / Shutterstock.com
8. Koenigsegg CCXR
This isn’t the last you’ll hear of Koenigsegg on this list (foreshadowing), but the CCXR is a monster in its own right. This bad boy reaches nearly 250 miles per hour. It features a 4.8 liter twin-supercharged flex-fuel Koenigsegg engine that churns out a whopping 1018 horsepower! One of the fastest production cars ever! 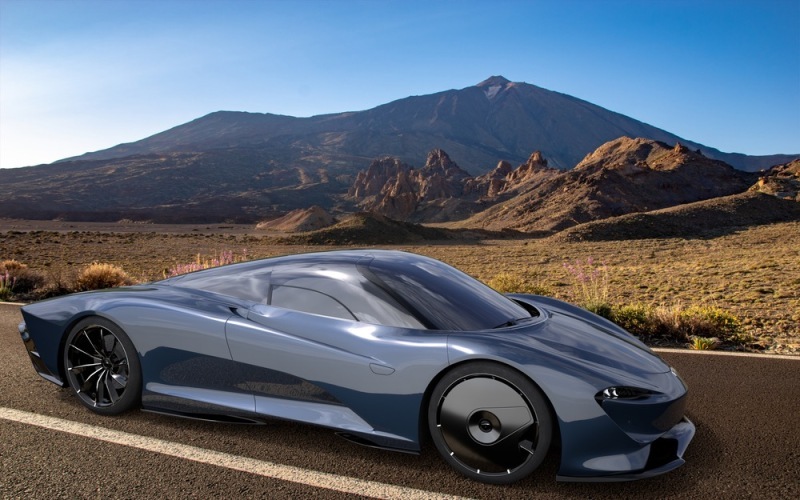 Mike Mareen / Shutterstock.com
7. McLaren Speedtail
Quite possibly the most unique body frame on this list, the McLaren Speedtail also features a fairly unique engine design as well. The 4 liter, twin-turbocharged V8 engine with parallel hybrid system puts this aerodynamic speedster at number 7 on the list of fastest production cars. 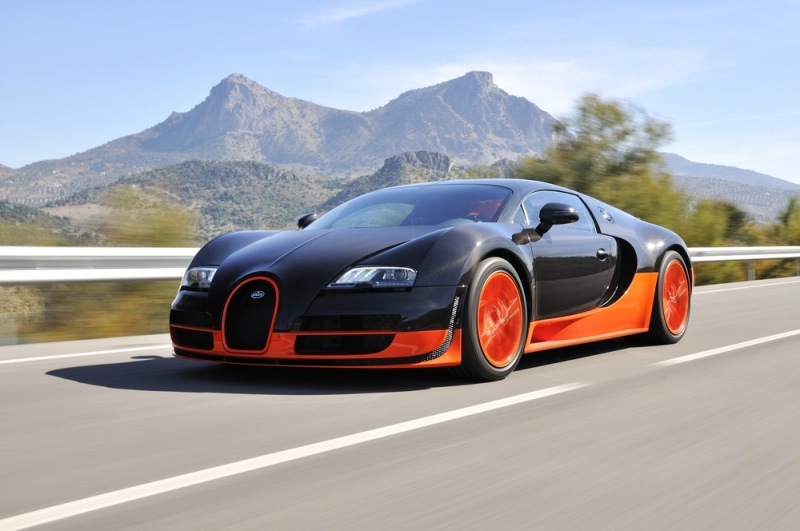 Max Earey / Shutterstock.com
6. 2005 Bugatti Veyron
The 2005 Bugatti Veyron puts you in control of 721 horsepower and 9,22 pound-feet of torque at 2,000 rpm. The auto only needs 266 of this horsepower from the 8.0-liter quad-turbo powertrain to reach 155 mph. The auto has an official top speed of 254 miles per hour, but you need to turn the special “speed key” to achieve it. This will drop the ride height, close the front diffuser panels, and almost fully retract the tail spoiler and rear wing. Those changes drop the drag coefficient to 0.36 from 0.37. One of the fastest production cars ever! 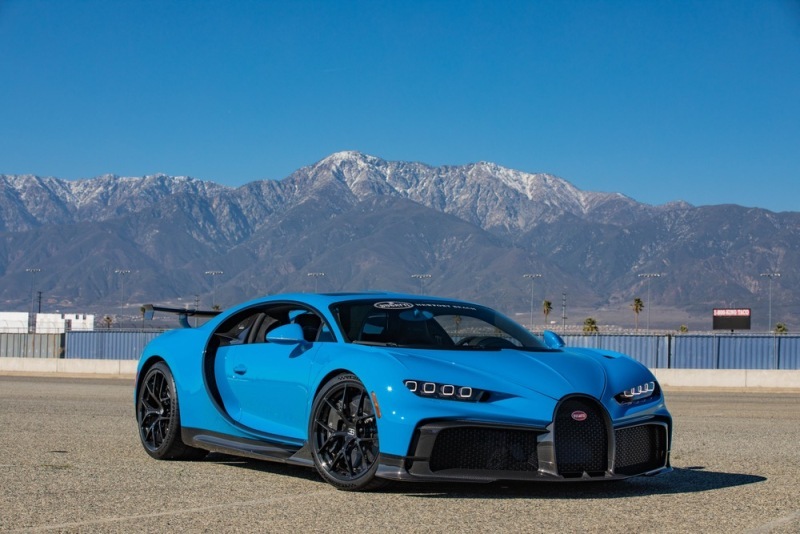 supermodel / Shutterstock.com
5. 2017 Bugatti Chiron
The 2017 Bugatti Chiron has a speedometer with 310 mph on it and Bugatti claims that it can reach 261 mph. According to the automaker, this was the first production sports car in the world to have 1,500 horsepower. You will have to be lucky and rich to drive one, as each cost $2.6 million at launch and only 500 were made. The Chiron features an all-mesh tail, a badge made from silver, and quad-LED headlights. Aerodynamics includes a four-position rear wing and spoiler, hydraulically operated diffuser, and front splitters. 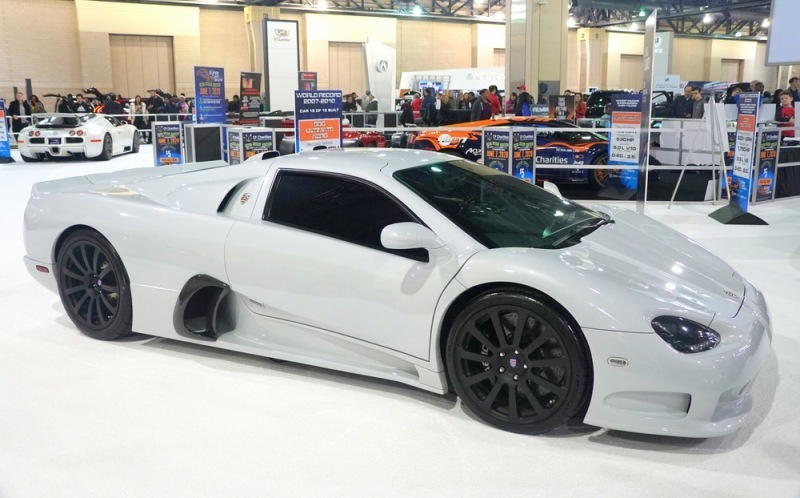 Khairil Azhar Junos / Shutterstock.com
4. Shelby Supercars Ultimate Aero
How does a car reach over 255 miles per hour? A twin-turbo V8 engine that churns out out a monstrous 1,287 horsepower and 1,112 pound-feet of torque. 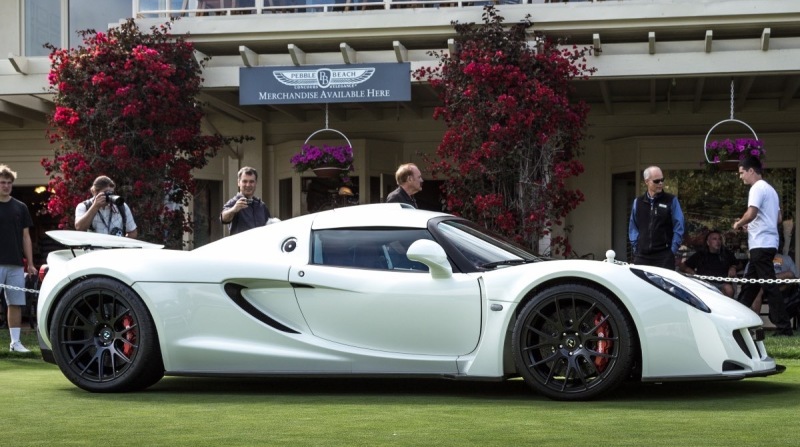 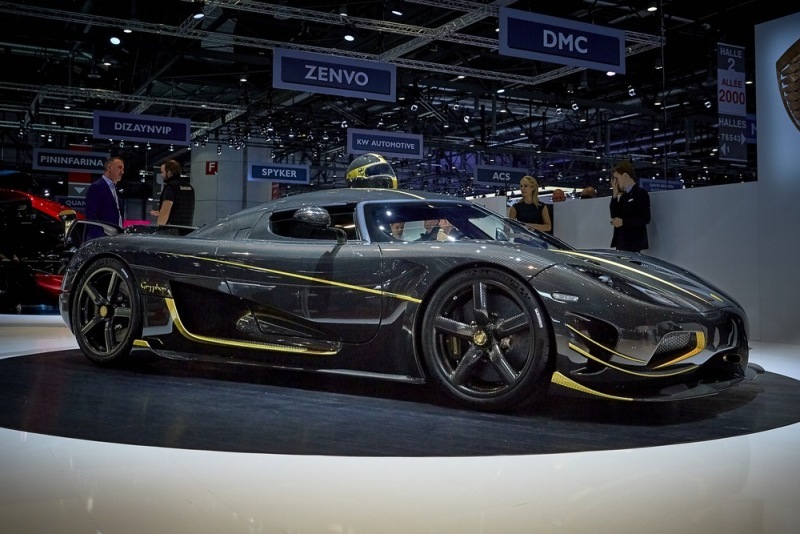 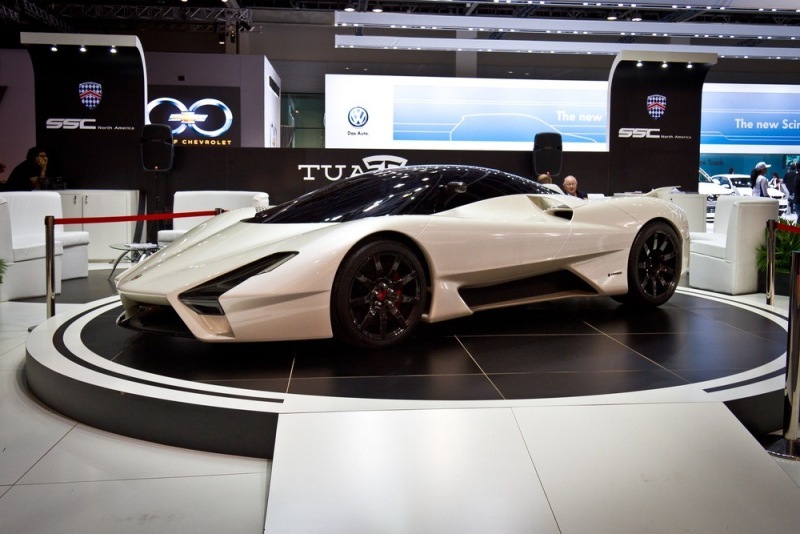 Sam Moores / Shutterstock.com
1. SSC Tuatara
Well here it is folks, the #1 fastest production car in the world! The Shelby Supercars Tuatara – labeled an “otherworldly driving experience” – reaches a phenomenal 300 miles per hour due to its 5.9 L (360.0 cu in) twin-turbocharged V8 engine.